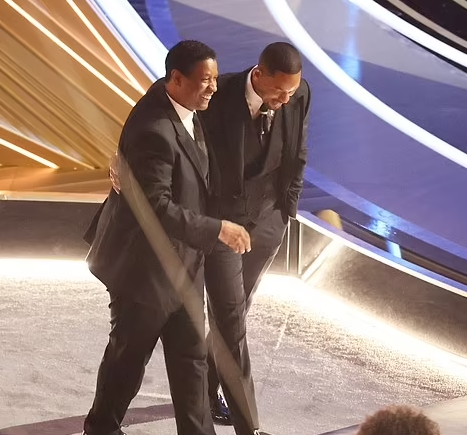 Denzel Washington, Tyler Perry, and Bradley Cooper comfort Will Smith after he slapped Chris Rock at the Oscars

Two-time Academy Award-winning actor Denzel Washington was seen consoling Will Smith at the Oscars after he slapped presenter Chris Rock for mocking his wife Jada Pinkett-Smith at the event on Sunday night, March 27.

Tyler Perry and Bradley Cooper also took Will aside to speak with him.

Chris Rock made a joke about the hairstyle of Smith’s wife Jada Pinkett Smith that referenced the movie “G.I. Jane” in which actress Demi Moore shaved her head.

However, Jada suffers from alopecia and didn’t find the joke funny. Will initially gave an awkward laugh but later stormed the stage to hit Chris.

During the commercial break shortly after the slap, Will Smith was taken aside and comforted by Denzel Washington and Tyler Perry, who motioned for him to brush it off.

Denzel is also seen comforting Jada and Will’s rep by his side.

Smith was also seen being further consoled by Bradley Cooper who placed his hands on Smith’s shoulders as he attempted to comfort him.

During his acceptance speech, Smith revealed that Washington had told him during the commercial break: “Be careful at your highest moment… that’s when the devil comes for you.”

“I went to Shiloh because of this. I prayed, I begged” – Nigerian man mourns death of his woman who died after battling cancer