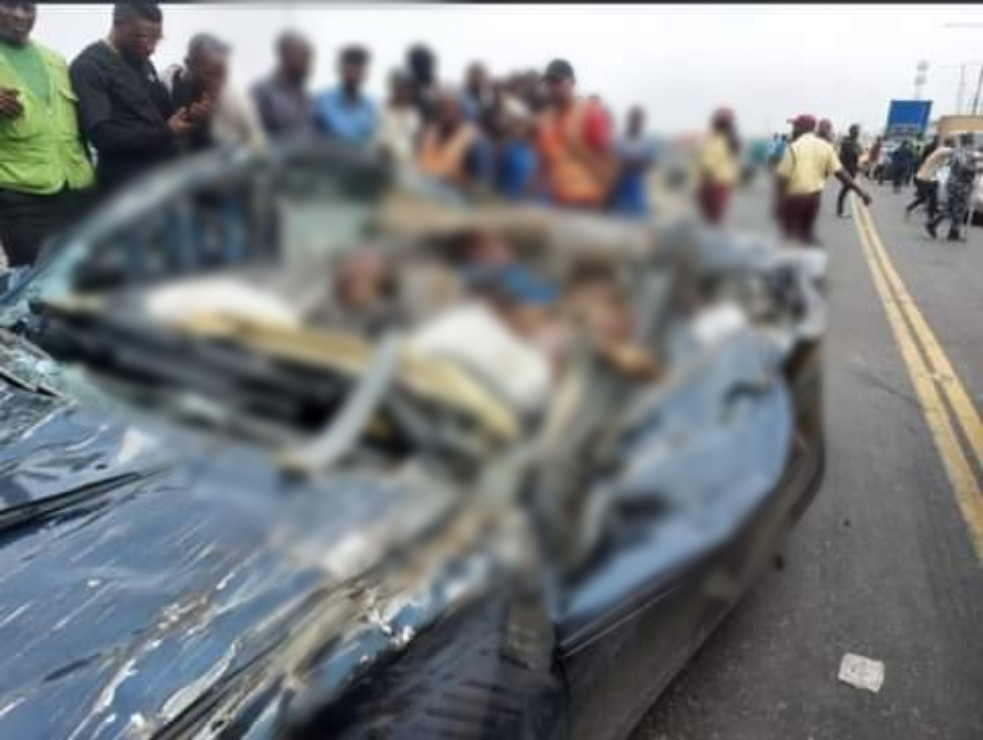 An Uber driver and his three passengers have lost their lives in a fatal accident on Eko Bridge, Lagos state on Saturday, March 26.

The victims, who were in a Toyota Camry, were plying the Eko Bridge to navigate to their destination when the driver of a Lexus 300, Yusuf Ambali, lost control of his vehicle and rammed into the Camry.

The impact of the collision, which damaged both vehicles, killed all four occupants of the e-hailing car.

However, Ambali was said to have escaped death by a whisker while the mangled remains of the victims, consisting of three men and one woman, were trapped in the car.

Emergency responders, who arrived the scene of the tragedy, were seen using equipment to pierce through the vehicle to recover the bodies.

The accident affected vehicular movement on the bridge, as traffic officials had a tough time managing the situation.

“Upon arrival at the scene of the incident, it was observed that a Toyota Camry with number plate EPE- 583 GT, was involved in an accident with a Lexus car,” he stated.

“Extrication of the commodities was done by the Cobra team with the aid of the agency’s light rescue equipment, while Lagos State Traffic Management Authority officials and police officers controlled the traffic as well as the crowd.

“The dead people were bagged and handed over to the State Environmental Health Monitoring Unit officials, while the affected vehicles were taken off the road with the aid of the agency’s light tow truck and handed over to Iporin Divisional Traffic Officer, thereby restoring normalcy on the road.”

Confirming the accident, spokesperson of the State Police Command, Benjamin Hundeyin, said the driver responsible for the accident had been arrested, adding that efforts were on to identify the victims.

“The Toyota Camry has been confirmed to be a Uber vehicle, so the driver was a Uber driver. But the identities of the occupants are yet to be confirmed because they had no identity cards and their phones were smashed.

“The only phone that wasn’t smashed is with the police and we have been waiting for a call to come in because the phone is an iPhone and was locked. But if nobody calls, we will do a forensic analysis on the phone to get a lead to ascertain the identity of the owner of the phone. The driver is in our custody and the two vehicles are also at the Iponri Police Station.”