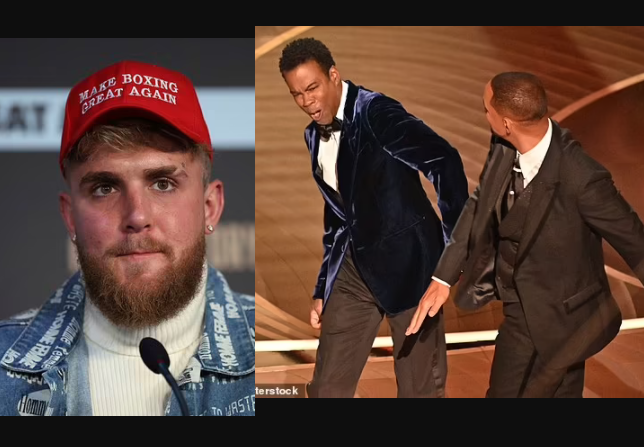 YouTuber-turned-boxer, Jake Paul offers Will Smith and Chris Rock £11.5m each to fight on the undercard of his next bout in the wake of Oscars controversy

Jake Paul has offered Will Smith and Chris Rock £11.5million ($15m) each to box following their controversy at the Oscars.

The Oscars was hit by a major scandal in its 94-year history after violence broke out on stage when Smith stormed up to host Chris Rock.

The slapping incident occurred after Rock cracked a joke about the ‘GI Jane’ haircut of Jada Pinkett Smith, 50, who has alopecia. The shocking scene, broadcast live around the world, stunned both the live audience at the Dolby Theatre in Los Angeles and TV viewers.

Smith later showed up on stage and slapped Rock with an open right hand. Rock staggered and exclaimed, ‘Wow, Will Smith just smacked the s**t out of me.’

Smith then walked back to his seat  and shouted: ‘Keep my wife’s name out of your f***ing mouth.’

Referring to Pinkett Smith’s buzzcut, Rock said: ‘Jada, can’t wait for GI Jane 2’, prompting the actress to roll her eyes. Pinkett Smith has been battling hair loss since revealing her alopecia diagnosis in 2018.

Yotuber-turned-boxer Paul, who is unbeaten in five professional fights, was quick to react to the controversy. He Tweeted: ‘Nah this is crazy ahah’.

Paul went on to offer Smith and Rock £11.5m each to box on the undercard of his fight, which is due to be in August.

‘Let’s do it in August on my undercard. ‘

The 25-year-old added: ‘Someone get me on the phone with Will Smiths boxing representative asap’.