A doting father has warmed the hearts of many after he surprised his son at his birthday party in a Spiderman suit.

According to the father with Twitter handle @ChuckRare, his son wanted Spiderman to come to his birthday party so he decided to stand up to the occasion and be his son’s Spiderman.

He took to the popular microblogging platform to share a video of how he pulled up at his son’s party with friends and family members in attendance, and his son was sure thrilled to see “Spiderman”. 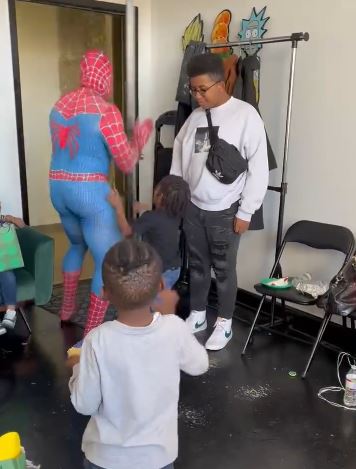 “My son wanted to meet spider man for his birthday so I hopped my thick ass in a spider suit and surprised him”, he captioned it.

The video has stirred sweet as well as hilarious reactions from social media users, as they react to how he was hopping around and tried to summersault in an attempt to entertain his son.

Watch the trending video below,

“I was once paid N5000 for a lead role” – Actor, Lateef Adedimeji recounts grass to grace story

“I’m not going to drag my ex; he treated me well” – Singer BNXN’s ex, Peggy replies those seeking insight on reason for their breakup (Video)

CAF doping officer’s death not due to violence at MKO Abiola stadium, he had a cardiac arrest