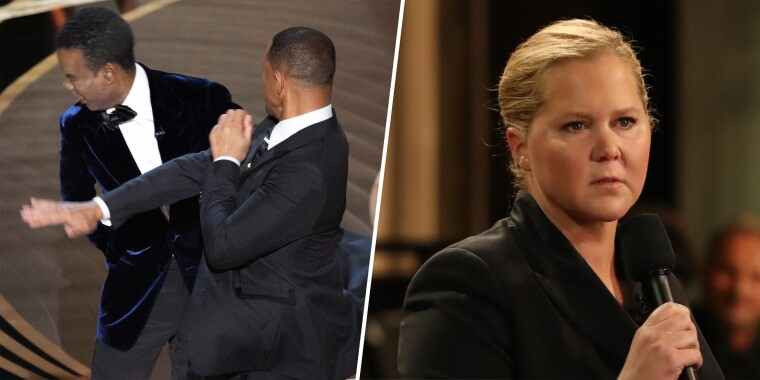 Amy Schumer has disclosed that she is “traumatized” by the onstage altercation that occurred at the 2022 Oscars on Sunday March 27.

The 2022 Oscars co-host, who served alongside Wanda Sykes and Regina Hall, addressed the now-infamous slap on Instagram early Wednesday by starting out with a joke promoting her new Hulu show but transitioned to supporting Rock.

“I think we can all agree that the best way to unpack what happened is to stream my series @lifeandbethhulu and see me on tour this fall. But for real. Still triggered and traumatized.

“I love my friend @chrisrock and believe he handled it like a pro. Stayed up there and gave an Oscar to his friend @questlove and the whole thing was so disturbing. So much pain in @willsmith anyway I’m still in shock and stunned and sad.

“Im proud of myself and my cohosts. But yeah. Waiting for this sickening feeling to go away from what we all witnessed.”

Neither Sykes nor Hall have publicly spoken out in the wake of the incident. Smith has released a public apology to Rock on social media, writing, “Violence in all of its forms is poisonous and destructive. My behavior at last night’s Academy Awards was unacceptable and inexcusable.”

Directly apologizing to Rock, he noted, “I was out of line and I was wrong. I am embarrassed and my actions were not indicative of the man I want to be. There is no place for violence in a world of love and kindness.”

Following the events of Sunday, the Academy of Motion Picture Arts and Sciences has launched a “formal review” of the incident to “explore further action and consequences in accordance with our Bylaws, Standards of Conduct and California law.”

‘Old age is not easy but I will put cream on the wrinkles’ – Simi sweetly celebrates husband, Adekunle Gold on his birthday (video)