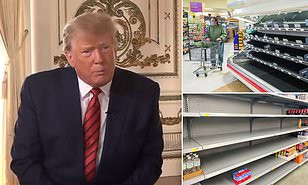 Former US president, Donald Trump has compared the United States to a ‘third world country,’ complaining that grocery, jewelry and hardware stores didn’t have complete items.

Appearing on Just The News, a show on right-wing network Real America’s Voice, during a Tuesday evening interview, March 29,  Trump was asked about what he would ‘triage’ among the multiple crises plaguing the country if he were to run for office and win in 2024.

‘These things — we would’ve never been talking about — I’ll give you an example. Supply chain,’ Trump began.

‘They say — even me, when I order things, like for furnishings, for a building or something — they say it’s going to take nine months to get it,’ Trump said. ‘Used to be like, same day service.’

He continued, ‘Supply chain — we never even heard the term. It wasn’t like, the system was working.’

Trump went on to say he’d solve the migrant crisis at the southern border, and then ‘inflation, which we can do.’

The interview comes just after Biden unveiled a $5.8 trillion budget proposal for Fiscal Year 2023 earlier this week, which includes hundreds of millions of dollars aimed at easing supply chain problems that have paralyzed the global transport of goods for months.

Inflation in the United States reached a new 40-year high of 7.9% in February as US markets grapple with coming out of the Covid-19 economic lockdown.

During his interview Trump also repeated the claim that Putin’s invasion would have ‘never’ happened if he were still in office.

Trump blamed his leaving the White House for Putin’s order to go into Ukriane after amassing troops at Ukraine’s border for months.

‘All of a sudden I’m out and they started forming on the border. And I actually thought it was a negotiating ploy. I thought it was very smart because I said, “That’s a good way to negotiate.” But it wasn’t,’ the ex-president said.

‘And I think if Putin had to do it again he would have maybe done everything the same but he wouldn’t have gone in.’