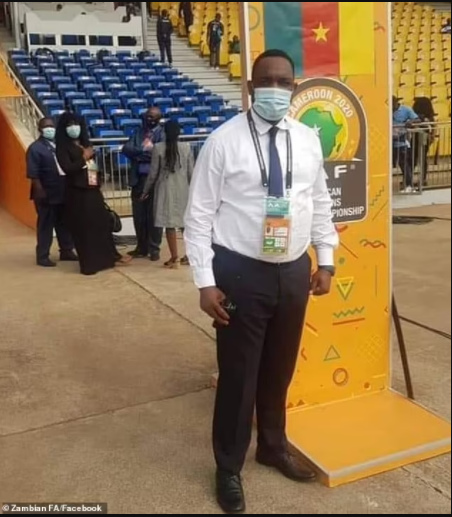 The Zambian FA has confirmed the death of Joseph Kabungo, a CAF medical official who died after the World Cup qualifier between Ghana and Nigeria in Abuja on Tuesday.

Kabungo had been on duty as the CAF anti-doping officer for the second leg of the play-off, which ended in a 1-1 draw that saw Ghana book a place at the World Cup in Qatar.

Zambian FA President Andrew Kamanga described Kabungo as ‘a dedicated and widely loved member of our football community who had a ‘vast impact’ on the sport in the country.

Before his death, a riot erupted following the game at Moshood Abiola National Stadium as angry Nigerian fans stormed onto the pitch before attacking players from both sides and causing damage to property.

Police had to use tear gas to disperse the furious mob who launched objects down the tunnel at players as they left.

The Zambian FA warned against speculating on how Kabungo died. ‘We take note that it is too early to dwell into the nitty-gritty of the cause of his death but will wait for the full report from CAF and FIFA on what exactly transpired,’ the organisation said.

Kamanga paid tribute to the official, saying in an emotional statement on Facebook that Zambian football had suffered a ‘huge loss’.

‘He was a dedicated and widely loved member of our football community and his impact was vast, having also been part of the 2012 Africa Cup-winning team,’ said Kamanga.

‘His death is a huge loss as Dr. Kabungo was a friend and confidant to many generations of players and their families.

‘He was one of the outstanding Zambian football personalities that flew the Zambian flag at global football events.

‘We all have to learn from his example of excellence and celebrate his legacy by breeding more hard-working football Zambian administrators.’

The Nigerian Football Federation could face sanctions for the post-match chaos inside the Abuja stadium.

Hollywood actor, Bruce Willis announces he has been diagnosed with degenerative brain condition and will step away from acting