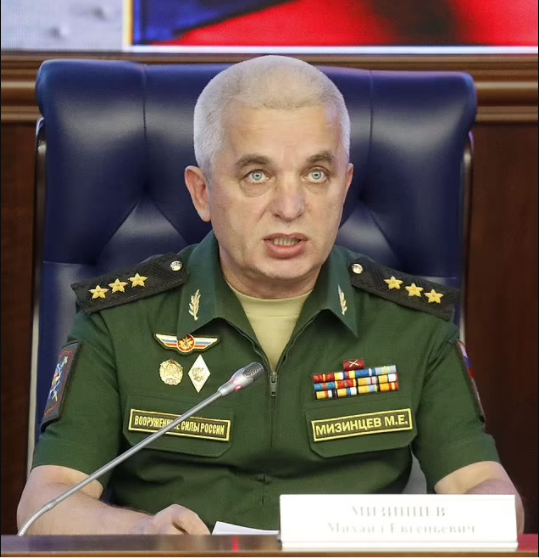 Russia’s bloody ‘Butcher of Mariupol’ and a host of Kremlin television executives have been added to Britain’s sanctions list.

Colonel-General Mikhail Mizintsev, who ordered a strike on a theatre that killed 300 civilians, is among 14 people and organisations hit in the latest wave of punitive economic measures unveiled by Foreign Secretary Liz Truss.

The latest names added to the sanctions list include propagandist Sergey Brilev and Kremlin-funded TV-Novosti, which owns the RT news channel.

Foreign Secretary Liz Truss said: ‘Putin’s war on Ukraine is based on a torrent of lies. Britain has helped lead the world in exposing Kremlin disinformation, and this latest batch of sanctions hits the shameless propagandists who push out Putin’s fake news and narratives.

‘We will keep on going with more sanctions to ramp up the pressure on Russia and ensure Putin loses in Ukraine. Nothing and no one is off the table.’

Mizintsev is facing demands for a war crimes prosecution over the attack on the theatre which killed 300.

Video released at the weekend showed injured civilians at the Donetsk Regional Drama Theatre after it was near-totally destroyed by Russian bombs aimed at building on March 16 despite a large inscription saying ‘children’ being clearly visible on the pavement outside.

In a chilling intercepted phone call he also appeared to berate a junior officer for not cutting off the ears of a private who had been caught not wearing his uniform properly.

Olexander Scherba, Ukraine’s ex-Austrian ambassador, this week branded Mizintsev the ‘Butcher of Mariupol’ while Oleksandra Matviichuk, head of Ukraine’s Centre for Civil Liberties, called on him to face war charges.

A Foreign Office source said: ‘Liz wants to keep on hitting Putin with sanctions to debilitate the Russian war economy and put Ukraine in the strongest possible negotiating position. There’ll be plenty more sanctions to come.’

“You always showed me love and spoke highly of me”, BBNaija’s Queen celebrates Liquorose as she clocks 27