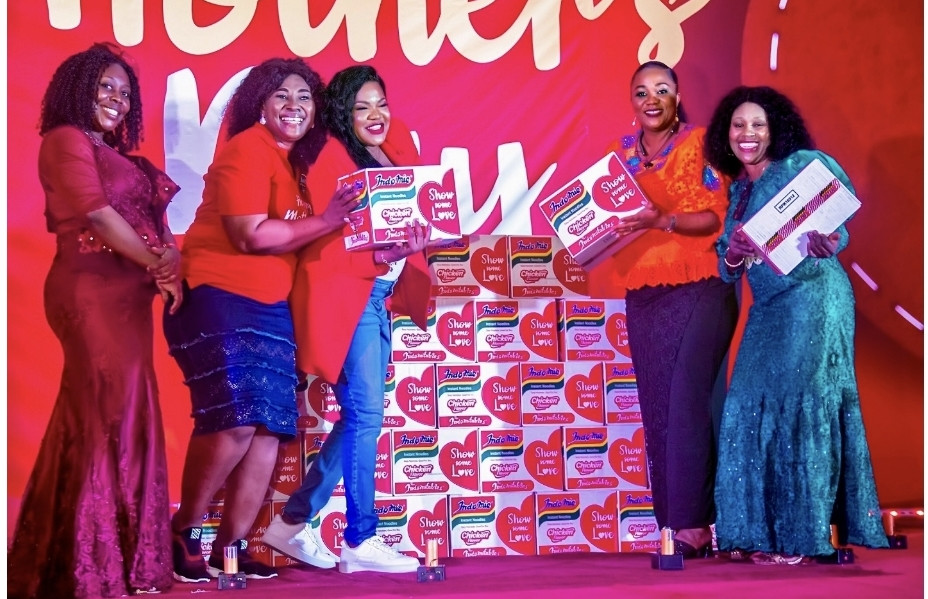 Leading noodles brand, Indomie Noodles, has kicked off a new campaign celebrating the unconditional love between mother and child. The campaign which started online with the hashtag ‘Unconditional Love’, took Nigeria by storm as it trended for days ranking as the number one online content with people sharing stories of the unconditional love they got from their mother.

Nollywood Actress/ Celebrity Mum, Toyin Abraham at the Indomie Mother’s Day Celebration and Unveiling of Indomie “Unconditional Love” Campaign in Lagos
The climax of the campaign was the release of a new TVC on ‘Unconditional Love’. The campaign also saw Indomie celebrate many mothers to commemorate the 2022 Mother’s Day amidst the unveiling of a new Indomie Carton called Show some Love.

According to Temitope Ashiwaju, the Group Corporate Communications and Event Manager, Dufil Prima Foods Plc, “A mothers’ love is unconditional, even when the children are undeserving of it. They express this love to their kids in different forms, especially with a delicious bowl of Indomie. They are always relentlessly performing their duty towards ensuring the wellbeing of their children and family day-in and day-out, without fail or break, even at their own expense.”

He said the new theme campaign is an emotional reflection on mothers’ unconditional love to their children despite all their shortcomings and how Indomie has been quite handy as a bargaining tool, especially when mothers need to negotiate terms with the children.

Ashiwaju explained that the new TVC brings to fore the unconditional love between a mother and a child right from birth through the upbringing process, protecting and taking care of them, despite some of the challenges they face. “We are confident the new theme campaign will adequately showcase this special love of mothers for their children even as this will help to have a better society”. He concluded.
Speaking at the Mother’s Day event, National Coordinator, Indomie Fan Club, Faith Joshua explained that the essence of Mother’s Day is to celebrate the Unconditional Love of mothers and build lasting memories between mothers and children.

“Mother’s Day celebration for us at Indomie is unique because we believe in the unconditional love between mother and child. Aside from the unconditional love mothers give their children, Indomie is one of the best gifts a mother can use to express her love to her child, and when mother and child share a plate of Indomie Noodles, that is a priceless experience,” she said.

In her remarks, the award-winning actress, Toyin Abraham Ajeyemi applauded the role mothers play in keeping the home together while praising Indomie for recognizing the role of mothers play. “Motherhood is one of the important and selfless commitments women make and I am excited and indeed pleased with the roles Indomie is playing in recognising and celebration mothers.

The event, which provided an opportunity for mothers to bond with their children through games and other fun related activities was coordinated by Nollywood screen diva and celebrity mum, Toyin Abraham Ajeyemi.