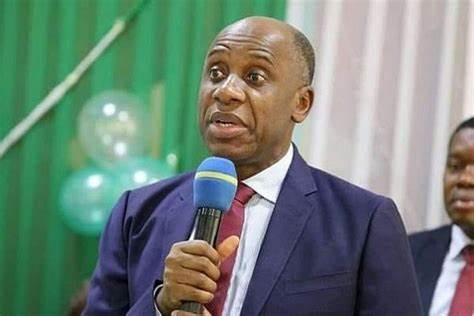 The Minister of Transportation, Mr Rotimi Amaechi has asked Nigerians to raise money for treatment of victims of Kaduna-Abuja train attack.

Amaechi, who had visited the scene of the attack on Tuesday March 29, said the train attack would have been stopped if the procurement of the N3 billion high capacity rail track cameras and sensors was not blocked.

Visiting the victims who are being treated at the 44 Nigerian Army Reference Hospital in Kaduna on Wednesday March 30, Amaechi said victims of the attack are being treated by the army without being charged for it.

Pointing out that some of the patients need drugs that are not manufactured in the country, Amaechi asked Nigerians to assist in raising the money.

”The CMD and I have been talking, the army has not charged one kobo on any patient, and they have given the maximum medical treatment that they can give to any patients.

”You saw the patients with burns and then the one that has bullet located in her heart. They are bringing an expert tomorrow for that one to see if there will be surgery or not to take out the bullet.

”They said they have only seven (patients) left and the rest have been discharged. The ministry, and I think the federal government, are grateful to the Nigerian Army for providing such services. But one thing I have said to the Nigerian people is to liaise with the hospital management and see how much money they can contribute for the treatment of the patients.

”Obviously those drugs are not manufactured here, the experts they are bringing from outside doesn’t work with the army, so they definitely have to pay them. We will try as much as possible to see what contributions we can make to the management of the hospital to assist in taking care of the patients.”