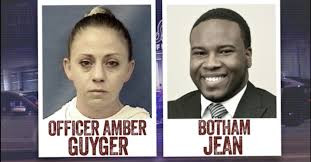 Texas’ highest criminal court has upheld the murder conviction and 10-year prison sentence of Amber Guyger, the former Dallas police officer who fatally shot Botham Jean in his apartment in 2018 after she said she mistook him for an intruder.

Her attorneys wanted the murder conviction tossed and a new punishment trial for a lesser charge of criminally negligent homicide.

During her appeal, her lawyers argued because she believed she was in her apartment, Guyger was acting in self-defense, according to court documents. Her right to self-defense, if applicable, “did not negate her intent to kill Jean.”

Jean was sitting at home and eating ice cream in his Lamar Street apartment on Sept. 6, 2018, when Guyger, who lived on the floor above him, walked into his apartment, thinking it was her own. Guyger, who was off duty but in uniform, said she believed Jean was an intruder and shot him.

Guyger, now 33, is serving her 10-year sentence at the Mountain View Unit in Coryell County. She will be eligible for parole in 2024.