Pastor wipes off bride’s makeup at the altar, then makes bridesmaid scrape off her nail polish with a scissors(video)

A video making rounds online shows the moment a zealous pastor was wiping the makeup off the face of a bride and her bridesmaid.

In the trending video, the bride and her groom are seen standing at the altar to take their wedding vows, when the pastor made a U-turn and started cleaning the bride’s makeup with a damp napkin.

He also ordered the bridesmaid to scrap off the bride’s nail polish off her fingernails and gave her a scissors to do so. 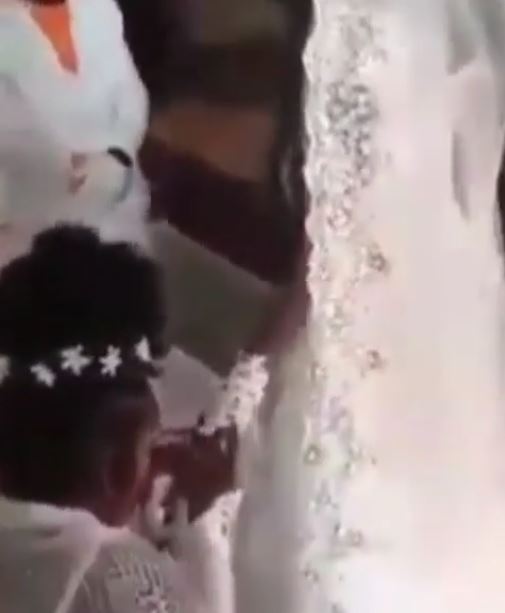 After cleaning the bride’s makeup to his satisfaction, the pastor proceeded to also wipe the bridesmaid’s makeup with the same napkin he used on the bride’s face.

All the while, the groom simply stood and didn’t make any move while the crowd could be heard hailing the pastor.

The video has sparked outrage online as netizens criticize the pastor for his actions and the groom for not making any attempt to defend his bride-to-be.

@iamlilgaga wrote, “The pastor, the husband, the wife wey even allow am , the camera man wey no deck the camera for pastor head , infact the whole church “

@banksbmpro wrote, “Ridiculous….. The way Women have been Conditioned for Abuse 😢”

@an_ge_li_na_stan wrote, “What kind of rubbish is this? In the public? She’s yet to step into the marriage and she has started to endure nonesense! This type of man is a dream crusher, you have to dance to his tone on everything at the detriment of your happiness or opinion.”

@empressinteriors1 wrote, “Imagine the humiliation on her wedding day? Africa and backwardness “