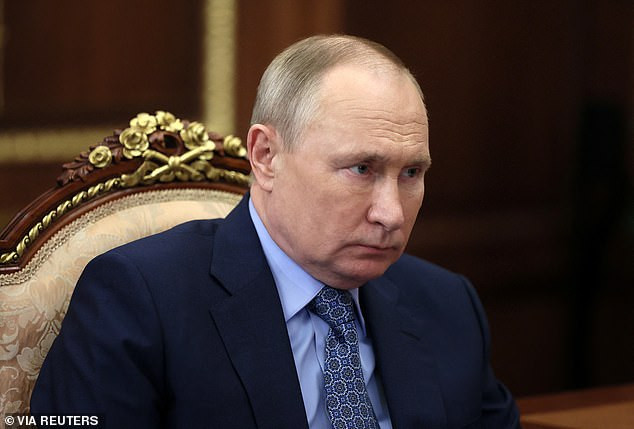 The U.S. says Russian President Vladimir Putin is being misinformed about how poorly his troops are performing in Ukraine.

According to US intelligence officials who released newly declassified intelligence on Wednesday, March 30,  there is tension between the Russian leader and his Ministry of Defense.

Details emerged on day 35 of Putin’s invasion of Ukraine, where the main Russian advances have been stalled for weeks.

But Putin has been oblivious that his armed forces were using and losing conscripts, according to the new intelligence report.

‘We have information that Putin felt misled by the Russian military, which has resulted in persistent tension between Putin and his military leadership,’ said White House Communications Director Kate Bedingfield, confirming an earlier briefing by an unnamed official.

‘We believe that Putin is being misinformed by his advisers about how badly the Russian military is performing and how the Russian economy is being crippled by sanctions because his senior advisers are too afraid to tell him the truth.’

‘We would concur with the conclusion that that Mr. Putin has not been fully informed by his ministry of defence at every turn over the last month,’ he told reporters.

But it was ‘disconcerting’ to think that Putin was not being kept in the loop.

‘And so the fact that he may not have all the context, that he may not fully understand the degree to which his forces are failing in Ukraine, that’s a little discomforting.’

‘If he’s not fully informed of how poorly he’s doing, then how are his negotiators going to come up with an agreement that is enduring?’