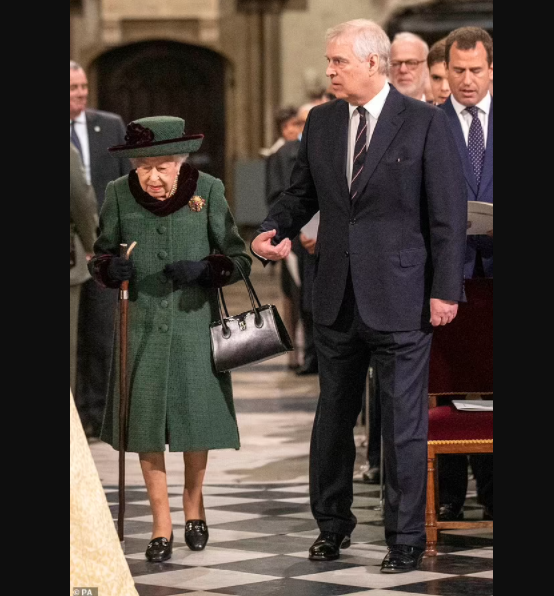 Queen Elizabeth believes Prince Andrew is innocent and asked him to accompany her at Prince Philip’s memorial, royal expert claims

The Queen allowing Prince Andrew to escort her to Prince Philip’s memorial service showed she ‘believes he’s innocent’, and is still determined to ‘make her own decisions’, a royal expert has claimed.

Speaking on True Royalty TV’s The Royal Beat, Vanity Fair’s Royal Editor Katie Nicholl, said the Queen knew what she was doing and deliberately wanted to show that she still ‘makes the decisions’.

The monarch has been scaling back her public appearances since the start of the year due to mobility issues, but as her biographer Robert Hardman recently noted, she is ‘absolutely pin-sharp as ever’, and seemingly wants to make that clear.

His prominent role on Tuesday came just weeks after agreeing a multi-million-pound settlement with his rape accuser Virginia Giuffre, whose claims he has always denied.

He was stripped of his military honours and royal patronages, and told by Prince Charles he would be made to ‘disappear’ from public life following his final official outing for his father’s memorial.

‘This was the Queen’s way of showing two things; one, that the buck stops with her, and she makes the decisions, and secondly that she believes he’s innocent. She made the point very, very clearly,’ Katie said.

‘But Charles and William were very aware of the perspective, of the optics of this.

‘Unfortunately, this picture [of Prince Andrew escorting the Queen] has overtaken what should have been a memorial to a great man.’

Katie added that Prince William and Prince Charles were totally against Prince Andrew escorting the Queen to the service. saying: ‘They knew the result of this…

And the Queen’s decision to allow Prince Andrew to escort her to the memorial service for her late husband was designed to show that she is still the main decision maker in the Royal Family.

On the programme, Royal biographer and journalist Duncan Larcombe said how the display of resilience was to show ‘we’re not going to lock him in the cupboard’.

He said: ‘This is the first proper set piece royal event since Prince Andrew settled his case, and it’s a way of getting it out of the way – you know, we’re not going to lock him in a cupboard, he’s at his father’s memorial service and of course he’d be there’.

‘But I think that it was a very bold decision of the Queen. Let’s not forget the guy she’s standing next to is a pariah at the moment in this country.’