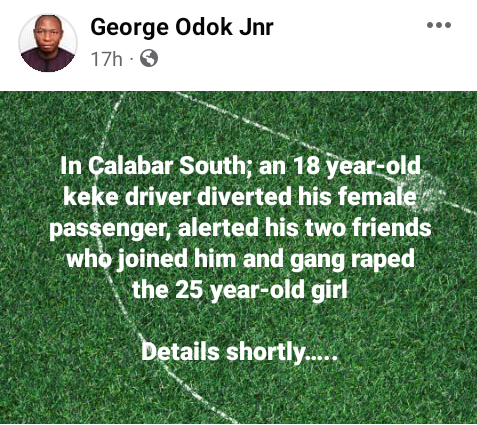 An 18-year-old commercial tricycle rider and his two friends have been arrested for allegedly gang-raping a 25-year-old woman in Calabar, Cross River state.

Senior Correspondent with News Agency of Nigeria (NAN) George Odok Jnr, who confirmed the incident on Thursday evening March 31, said that the teenager diverted the female passenger and then alerted his two friends who joined him to rape the victim.

“In Calabar South; an 18 year-old keke driver diverted his female passenger, alerted his two friends who joined him and gang raped the 25 year-old girl.” he wrote.

“How much is minimum wage?” Motorist expresses outrage as he narrates how he was charged N110,000 for “illegal” parking in Lagos