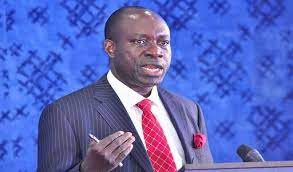 Governor Charles Soludo of Anambra state has called on the people of the state to observe a one-day prayer session to curb the activities of the gunmen terrorising the state and the South East region in general.

The governor said the prayer session slated to hold on Monday, April 4, 2022, at churches and other religious worshipping centres, across the state, was necessary to counter the evil attached to the Indigenous People of Biafra (IPOB) sit-at-home order.

While speaking at a stakeholder’s peace meeting with Security Chiefs, Traditional Rulers and Religious Leaders, at Prof. Dora Akuyilli Women Development Centre Awka, Governor Soludo said the move became necessary to seek spiritual solution to the challenges currently affecting economic activities. He explained that the prayer session was against those hiding under the IPOB name to cause havoc in the state.

He implored citizens and residents of the state as well as all religious congregations to join in the important day of prayer expected to take place within the premises of Cathedrals, Churches and prayer Houses across the state and beyond.

“I enjoin you to pause and join in fellowship as we seek the face of God. It is expected that the conclusion of the prayer session shall mark the end of Sit At Home in Anambra State.”he said

He pointed out that the sit at home order was ill-advised and counterproductive and not the solution to the release of the Leader of IPOB, Mazi Nnamdi Kanu, adding that effort was being made to ensure speedy resolution of his detention.

He stressed that every Monday was a very important day to Ndi-Anambra and the government that loses millions of naira as a result of the order.

Recall that last year, IPOB ordered the people of the South-East to stay at home every Monday in protest over the incarceration of its leader, Nnamdi Kanu who was arrested last July and is currently undergoing trial.