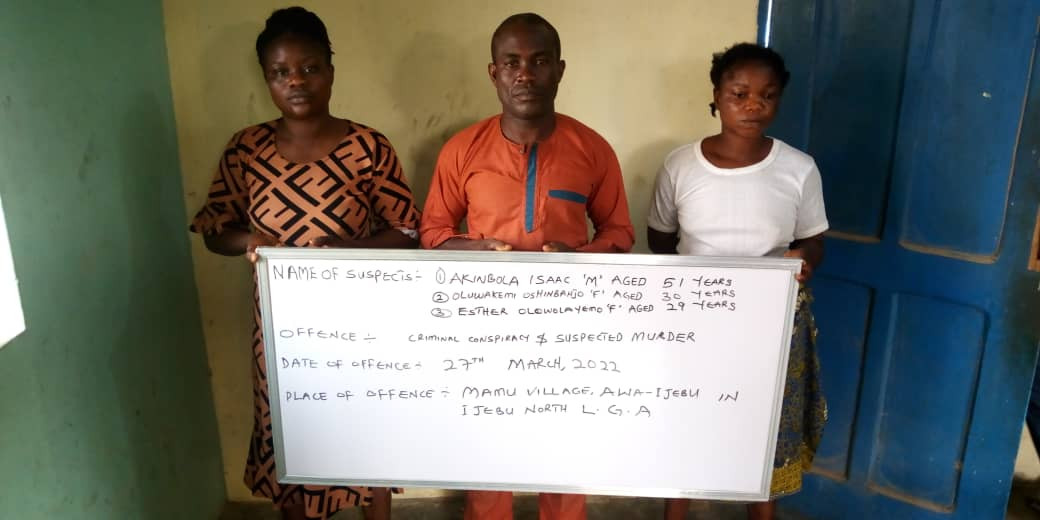 The suspects were arrested on March 27 following a report lodged at Awa Ijebu divisional headquarters by the pastor’s wife, Dasola Akinbola, that she had been having a disagreement with her pastor husband over his illicit affair with some female members of the church for some time now, and that the said husband came to her house at Ipinle area of Mamu ijebu with two women, who she has been suspecting of having illicit affair with her husband to beat her up.

Dasola told the police that while they were beating her, their eight-month-old baby, Obadiah Akinbola, fell down as the husband kept telling the two women to beat her thoroughly.

Upon the report, the DPO Awa Ijebu division, CSP Adewalehinmi Joshua, ordered the arrest of the three suspects, while the woman and her baby were taken to Mamu Ijebu health center for medical care.

The woman and the baby were later taken to the Blessed Hospital Oru Ijebu where it was discovered that the baby had an internal injury that he sustained when he fell down from his mother’s hands during the scuffle. The child gave up the ghost on the 28th of March 2022 while receiving treatment as a result of the internal injury.

The remains of the child has been deposited at the general hospital Ijebu Igbo mortuary for autopsy.

Confirming the incident, the state police public relations officer, DSP Abimbola Oyeyemi, said the state commissioner of police, CP Lanre Bankole, has ordered the immediate transfer of the suspects to the homicide section of the state criminal investigation and intelligence department for further investigation with the view of arraigning them in court as soon as investigation is concluded.

Top 4 places to visit during Ramadan