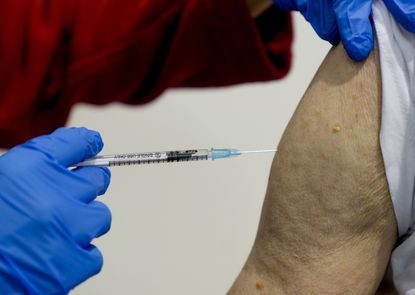 A man in Germany has been arrested after getting himself vaccinated at least 90 times against COVID-19.

Accordingly to authorities on Sunday, April 3, the man was arrested in the German city of Magdeburg. His reason for taking the vaccinations was not for health, but to accumulate vaccine cards to sell.

According to German privacy laws, his name could not be released to the media , but police authorities say he reveived the dozens of shots at vaccination centers in the eastern state of Saxony for months before he was finally caught.

The man was caught at the vaccination center when he arrived for a COVID shot for a second day running, carrying blank vaccination cards that police confiscated.

Police say he was not detained because receiving the vaccines is not a crime, but he is being investigated for unauthorized issuance of vaccination cards and document forgery.

“Most of the time, your risk of serious side effects does not increase if you get extra doses of a vaccine,” the U.S. Centers for Disease Control and Prevention (CDC) says on its website.

Any risk is related to the time interval between them rather than the vaccine themselves, the CDC said.

“In these cases, it is the spacing of the doses, not the number of doses, that creates the risk,” the CDC said, referencing pneumococcal vaccine and the DTaP for diphtheria, tetanus, and pertussis, but not COVID. “These reactions can be unpleasant, but they are not life-threatening.”

At least 130,029 people have died of the novel coronavirus in Germany to date.

Nigerian man excited as his ex-girlfriend pays him a surprise visit, narrates reason for their breakup (video)