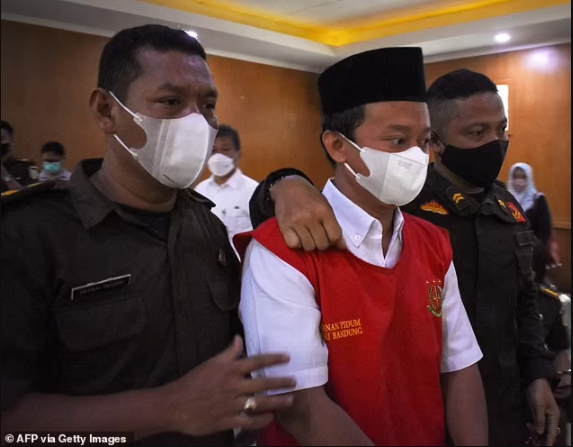 An Islamic teacher who raped 13 girls at an Islamic boarding school in Indonesia is now facing the death penalty, a court has today said, after he had initially been sentenced to life in prison.

Herry Wirawan, who judges said sexually groomed 13 girls, aged between 12 and 16 years old and impregnated at least nine of his victims – was sentenced to life in jail in February but prosecutors who filed for the death penalty filed an appeal.

‘(We) hereby punish the defendant with the death penalty,’ the judge said in a statement on Monday posted on the Bandung High Court’s website.

Ira Mambo, Herry’s lawyer, declined to comment on whether there would be an appeal, citing a need to see the full ruling from the court.

A spokesperson for the local prosecutor’s office also said it would wait to receive the final ruling before commenting.

Between 2016 and 2021, Herry sexually groomed 13 girls, who were between 12 and 16 years old, and impregnated eight of his victims, a judge said in February.

Wirawan had arrived in court in handcuffs and kept his head down as the judge sentenced him. The court said restitution for the victims will be paid by the government.

While the chairman of Indonesia’s Child Protection Commission said the initial verdict meant ‘justice for the victims has been served’, a family member of one of the victims told AFP news agency he was ‘very disappointed’ that Wirawan did not receive a harsher sentence and warned that leniency would embolden other abusers.

‘This wound will never be healed as long as we live, maybe until we die. The pain we are feeling is indescribable. We don’t feel heard,’ said Hidmat Dijaya, an uncle of one of the 13 victims.

‘If the sentence is lenient like this, there will be more Islamic teachers who will abuse children,’ he added.

‘We will let God as the highest judge punish him. We can only pray because those judges failed to represent our hurt and pain.’

Dedeh Marlina, a 42-year-old housewife living near the school where Herry taught, had said she was relieved the perpetrator had been stopped but that the damage had been done.

‘I know most of them came from poor families in remote areas…unfortunately they are now carrying the burden of what happened,’ she said.

Officials said many of the victims did not report their rapes for fear of having to relive the traumatic experience, and their parents had trusted that the boarding school was guiding their children to become good and religious people.

Some of Wirawan’s victims had also suffered injuries from the rapes.

West Java police began to investigate the case and arrested Wirawan last May when parents of a victim went to the police after their daughter returned home on a holiday and admitted she had just given birth.

The case drew a public outcry over the number of rapes and the length of time they occurred.

Indonesia, the world’s biggest Muslim majority country, has tens of thousands of Islamic boarding schools and other religious schools.