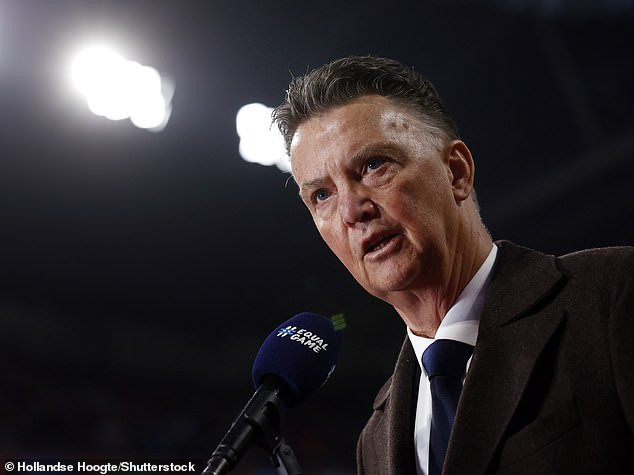 The Netherlands head coach confirmed the diagnosis on Dutch television show Humberto as he promoted his new film, LOUIS.

He explained that he had kept the illness a secret from his players for a considerable period of time in order to psychologically protect them.

‘In each period during my time as manager of the national team I had to leave in the night to go to the hospital without the players finding it out until now, while thinking I was healthy, but… I am not,’ he said.

‘I think you don’t tell people you work with like that because it might influence their choices, their decisiveness. So I thought they shouldn’t know.’

Van Gaal revealed that he had a ‘pretty aggressive form’ of cancer, but was staying positive as he paid tribute to the hospital staff that had treated him.

‘You don’t die from prostate cancer, at least not in 90 per cent of the cases. It is usually other underlying diseases that kill you.

‘But I had a pretty aggressive form, got irradiated 25 times. Then you have a lot of management to do in order to go through life.

‘I did have preferential treatment in the hospital. I was allowed in through the back door when I went to an appointment and was immediately pushed into another room.

‘I have been treated wonderfully. You will of course tell your friends and relatives about it. The fact that nothing has come out yet also says something about my environment. That’s great.’

His former clubs, Manchester United and Barcelona were quick to send a message of support to Van Gaal, posting on Twitter: ‘Everybody at Manchester United is fully behind our former manager, Louis van Gaal, in his battle against cancer.

‘Sending you strength and courage, Louis,’

The Catalan giants also sent out a heartfelt message to their ex-boss on social media, writing: ‘Our thoughts and prayers go out to former Barça manager Louis van Gaal, who has been diagnosed with prostate cancer. Stay strong, Louis, and get well soon.’

He won the Champions League with Ajax in 1995  and he won league titles in Spain and Germany with Barcelona and Bayern Munich, respectively.