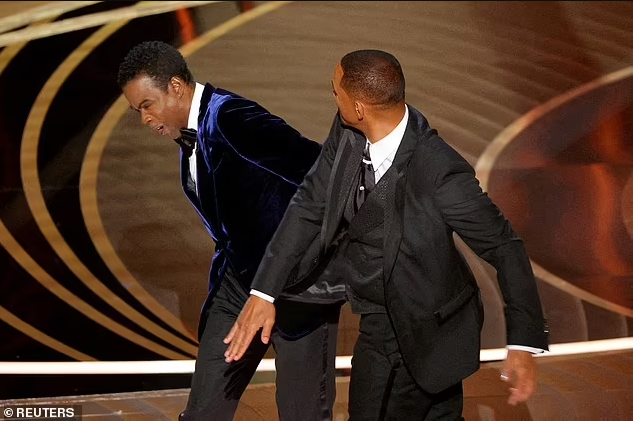 Will Smith’s biopic has reportedly been thrown into chaos after Netflix and Apple+  pulled out of a bidding war after the Oscars slap controversy.

Insiders believed the two streaming giants removed their competitive bids on the film about the Hollywood star’s life, based on his best-selling autobiography Will.

It comes after Will, 53, marched on stage and slapped Chris Rock during the Oscars ceremony after the comedian made a joke about his wife Jada Pinkett Smith’s haircut.

A source told The Sun: ‘Netflix and Apple+ have quietly removed their bids for a Will Smith biopic and will instead relocate the funds and develop original ideas from new black actors.’

The source added that working with the actorvhas now become ‘risky business’ as he faces his upcoming movie projects being put on hold in the wake of the scandal.

Meanwhile, work on the fourth installment of the Bad Boys film franchise has been halted by Sony following the Oscars scandal, according to The Hollywood Reporter.

The film would have seen Smith reunited with co-star Martin Lawrence as a maverick Miami drugs agent.

And Netflix has reportedly slowed down production on its planned action thriller movie Fast and Loose, which stars Will.

The film had already lost its intended director prior to Smith slapping Chris, further complicating the film’s path to being shot.

Fast And Loose was originally to be helmed by Deadpool 2 director David Leitch, but he had withdrawn from the project just a week before the Oscars.

A source told THR that both Netflix and Universal had been competing for a new project from Leitch, but the traditional studio appealed to him more than the streamer.

Following the loss, Netflix started urgently searching for a new director to take over on Smith’s project.