Nollywood stars, Stan Nze and Jessica Obasi have shared videos of their romantic proposal months after their wedding.

The couple, who tied the knot in a star-studded wedding ceremony on September 11, 2021, decided to bless their fans with moments from their intimate proposal.

Stan Nze claimed that he intended to take his wife, Jessica Obasi, on a trip abroad and propose to her there, but she had a film to shoot during that time, so she had to cancel the trip. 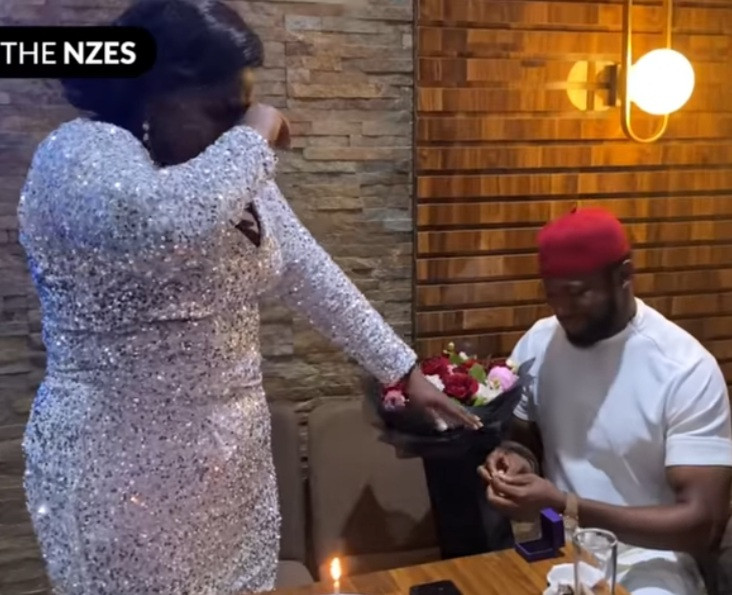 Jessica said she prepared a series of surprises for Stan’s birthday, which was May 15, three days after hers, to make it up to him for canceling the trip.

She planned a praise night with their close friends on the eve of his birthday, then checked him into an hotel.

She then treated him to an English breakfast tray served in their hotel room. In the evening, she planned a surprise all-white dinner for him and invited their close friends.

Unknown to her, Stan was aware of the surprise and was also planning to surprise her with a proposal at his surprise party. At the end of the surprise dinner, while giving a vote of thanks, Stan proposed to her.

On popping the question, the love birds, who were filled with emotions, first shed tears of joy till they were satisfied, before Stan put the ring on his woman’s finger after he got a ‘yes’.