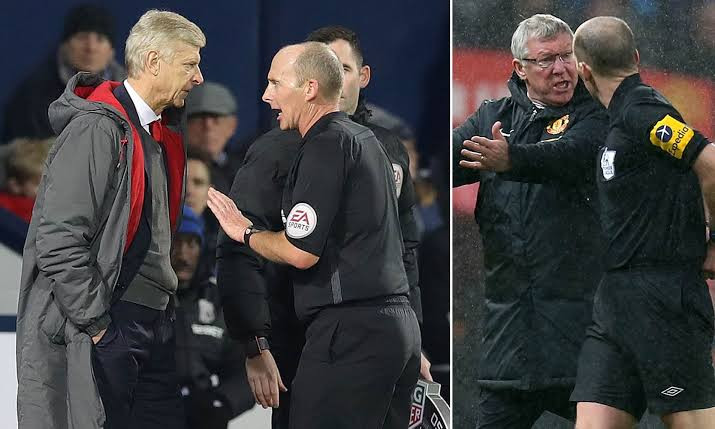 Iconic referee Mike Dean has revealed the toughest managers he has faced during his career as a top level referee in football.

According to Mike Dean, Arsene Wenger was the most intimidating manager he has officiated with, calling him a ‘tough presence’ during Arsenal games but stressed Sir Alex Ferguson was ‘not that bad’ despite his fierce reputation.

Dean will retire as a match day referee at the end of the season and become a full-time VAR official.

While reflecting on his career and experiences as he faced some of the top players and managers, the 53-year-old was asked who the toughest managers he has gone up against were, with many expecting him to name former Manchester United coach Sir Alex Ferguson.

But he chose Wenger saying the french man was ‘tough’ on the touchline because he ‘wanted the best for Arsenal’ and would make life difficult for referees.

‘It has to be Arsene when he was at Arsenal,’ he told BBC Sport.

‘Since he has finished football I have seen him and he has been great. Cross the white line and everyone is different, like referees. We are normal people.’

Dean infamously sent Wenger to the stands during a game between Manchester United and Arsenal at Old Trafford in 2009 after he kicked a water bottle in anger following Robin van Persie’s goal being chalked off for offside.

As for Ferguson, Dean said the legendary Scot was actually not as stern as many believe.

‘He used to get a lot of stick saying he’d come in and bang the door down,’ Dean added. ‘He would come in now and then to express his views if something had gone really badly, but he wasn’t as bad as people made him out to be.’