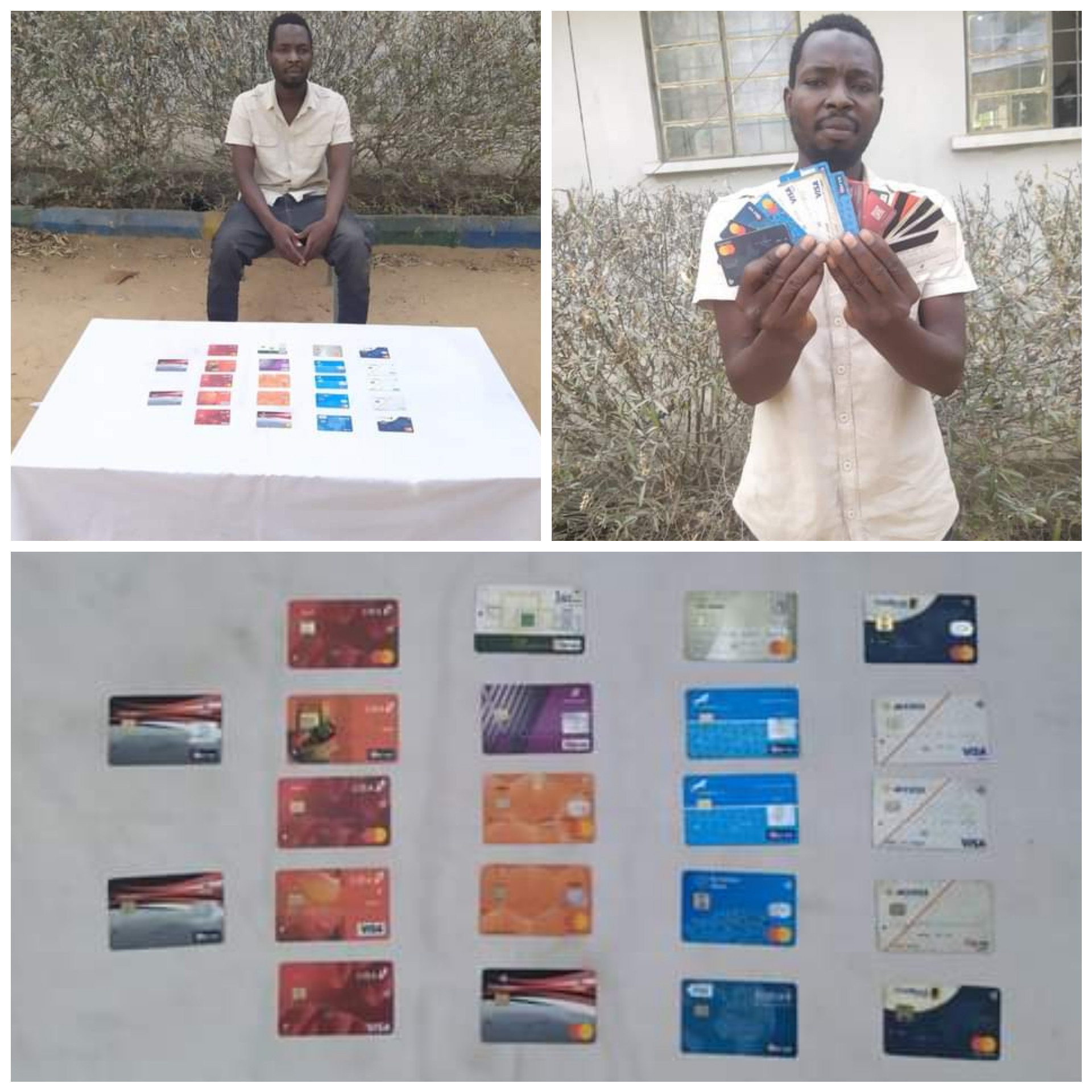 Kano State Police Command has arrested a notorious fraudster, Gaddafi Jibrin, who specialises in defrauding people at ATM points in the state.

Spokesperson of the command, SP Abdullahi Haruna Kiyawa, who disclosed this in a statement on Wednesday, April 6, said the suspect was arrested in possession of 22 ATM cards of different banks.

The suspect confessed to the crime and said their syndicate used to swap ATM cards and withdraw money from victims’ bank accounts.

“On the 20/03/2022 at about 2340hrs, a team of Operation Puff Adder led by CSP Mustapha S. Ahmadu while on intelligence-led patrol along IBB way by Bata Kano, intercepted one Gaddafi Jibrin, ‘m’, aged 33 years old, of Tudun Maliki Quarters, Zoo Road Kano. On spot search, he was found in possession of 22 ATM Cards from different banks,” the PRO stated.

“After his arrest, one Kabiru Ado, ‘m’, complained that the suspect and his two gang members approached him while seeking assistance to operate an ATM, deceitfully collected and changed his ATM Cards, while his accomplices fled with his Stanbic IBTC Bank ATM Card. Their Operational Motor Vehicle, Peugeot 206 model was recovered

“On investigation, he confessed to the crime. He further confessed that, they normally use a 206 Peugeot Motor Vehicle to visit ATM points within Kano Metropolis, and that his syndicate members specialized in swapping ATM Cards by intimidating customers at ATM points, disguising under the pretext of assisting them to operate the machine. They have ATM cards from almost all the banks, making it easy for them to swap the ATMs.

“He claimed to have withdrawn money from many people’s accounts after swapping their ATM Cards. Discreet investigation revealed that the syndicate specialized in intimidating, deceiving, swapping the ATM cards of victims, and withdrawing money from their bank accounts.”

The State Commissioner of Police, CP Sama’ila Shu’aibu Dikko, ordered for discreet investigation, and arrest of escaped accomplices and strongly warns that criminals will have no hiding place in Kano State.

The CP advised them to either repent or leave the state completely. He urged residents to report incidences to the nearest Police Station and not to take laws into their hands.

Almost four tonnes of cocaine found in boxes of banana

“I have never been a crossdresser. I’m a skitmaker” James Brown’s colleague, Tobi The Creator, cries out in the wake of the crossdressibg bill