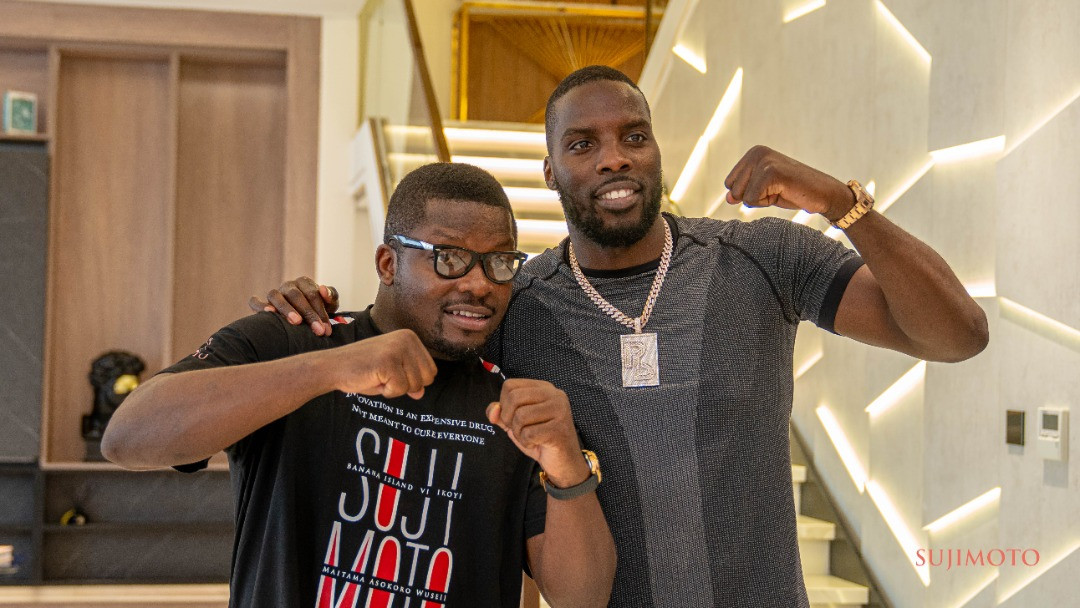 Lawrence Okolie, British boxer of Nigerian heritage who holds four major titles – the Commonwealth Boxing Championship, British Championship belt, European Championship, and the WBO Cruiserweight title. His record of 14 wins, 7 Knockouts, 0 draws are simply outstanding. Almost like the edifice- The Lucrezia, where he was standing on the 5th of April, 2022. The Urhobo boy has been undefeated but today, The Lucrezia has magnificently decided to challenge the champion.

The fully automated Luxury home, which is reserved for the 1% of the 1% has decided to be knocked out by the pride of this generation.

Location, architecture, and lifestyle welcomed the British, Warri blood boxer into the new address for luxury living – Banana Island, where Lawrence testified that the standard, he is seeing at the Lucrezia by Sujimoto is far better than some of the apartments he has visited in London and Dubai.

You could tell from the smile on the champion’s face that he took an uppercut by the architectural beauty of the building and his friends who accompanied him as well shared in the building’s quick jabs as they had only but pleasant words to describe the feeling the Champion Lucrezia gives.

“After a long day of taking some hard punches in training, this is the perfect place to come back to and enjoy the soft life” – Labi Odebunmi, one of his friends said.

The young boxer, who has succeeded in placing Nigeria’s name on the global market is back in Nigeria after donkey years and hopes to extend his athletic prowess to so many young boxers in the corners of Surulere, Agege and Mushin, giving back to his motherland and in return tapping from ancient strength of Nigerian delicacies like Amala, Tuwo and Akpu.

He hopes to have the biggest boxing match sometime soon in Nigeria being inspired by Mohammed Ali’s legendary fights. His number 1 hope is to bring his biggest fight to Nigeria where he intends to fight with top-notch boxers like Michal Cieslak, Anthony Joshua, Tyson Fury, Deontay Wilder and Dillian Whyte, Lawrence Okolie as part of his trip has visited his hometown Delta, Surulere in the hope to create a boxing school that teaches and trains kids on not just boxing but discipline and how to become great leaders.

I was very delighted when Kiddwaya told me about Lawrence Okolie and when he wanted him to visit to hear more about luxury and show him that whatever he sees in Dubai, New York, or London, we at Sujimoto have it here. We further discussed the company’s plans and how we are dedicated to the development of our great nation Nigeria for we believe that if it can be done outside the borders then it can be done back home.

I urge every Nigerian at home and abroad to support the number one pride of Nigeria during his next fight sometime in June. We should give him all our support as we would do to Anthony Joshua – a true champion, the Nigerian Nightmare Kamaru Usman, and Isreal Adesanya – The Last Stylebender as they keep Nigeria on the GLOBAL MAP.