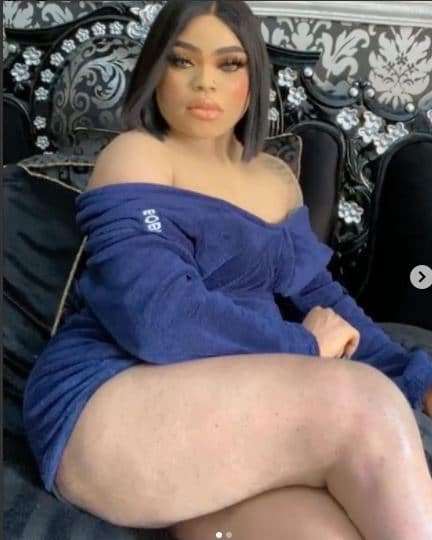 I’m not afraid of court, I have done many surgeries that turned me into a full woman – Bobrisky reveals

A few days ago, House of Representatives made a move to ban cross-dressing in the country, following a new bill proposed by a member of the house, Umar Muda.

On that note Nigerian celebrity Cross dressers Bobrisky, James Brown and others are at risk of six months jail term.

However reacting to the reports, Bobrisky clearly stated that he is now a full blown woman and so far done a lot of surgeries to confirm his claims.

The internet sensation whose real name is Idris Okuneye, said he is not scared of any court drama if the bill scales through.

“I am not a cross dresser, I am a woman. I have done so many surgeries that can’t be reversed such as Lipo, boobs, etc. When the time comes even court self go confirm am say I am now a girl,” Bobrisky wrote.

He added, “I still have many upcoming surgeries to be done. Na who be cross dresser go they fear. I have all my doctors report on all my surgeries. “

Kemi Filani recalls that the bill which was read aloud on the House floor on Tuesday, April 5, seeks to outlaw cross-dressing, with the exception of individuals who do it for amusement purposes.

I swear on my life, I am not in a toxic relationship – Funmi Awelewa cries out