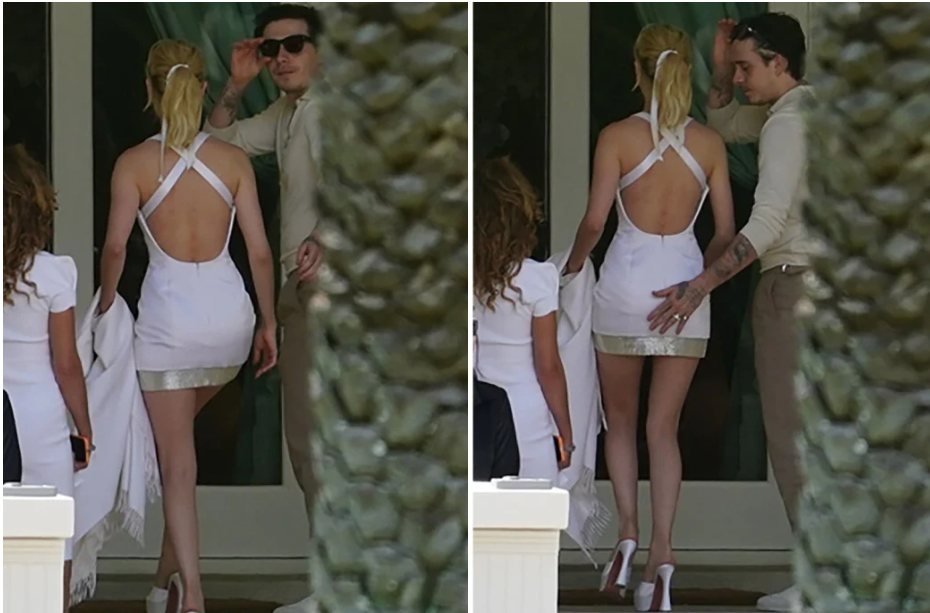 Brooklyn Beckham gave his new wife Nicola Peltz’s bum a cheeky squeeze as they headed to day three of their wedding extravaganza.

The couple enjoyed a post-wedding brunch on Sunday April 10, at the expansive Palm Beach, Fla., estate of the bride’s billionaire father, Nelson Peltz.

Brooklyn, 23, wore a cream sweater and brown slacks for the family gathering while Nicola, 27, donned a white minidress with metallic trimming paired with sky-high Louboutin heels.

The couple arrived to the event in what appeared to be a light blue 1958 Jaguar XK150S. The grooms’s parents, David and Victoria Beckham, also pulled up in a seemingly identical vehicle.

The former soccer player, 46, wore a white suit and the pop star-turned-fashion designer, 47, sported a long black dress that exposed most of her back.

Guests were treated to a lavish spread in a huge marquee erected on the sprawling gardens out back of the stunning Palm Beach residence on the morning after the flashy oceanfront nuptials.

Nicola and Brooklyn — who purchased a $10.5 million Beverly Hills mansion last summer — first met in 2017, but didn’t start dating until two years later. They got engaged in July 2020.

Champions League: It will be almost impossible for Chelsea to beat Real Madrid – Tuchel