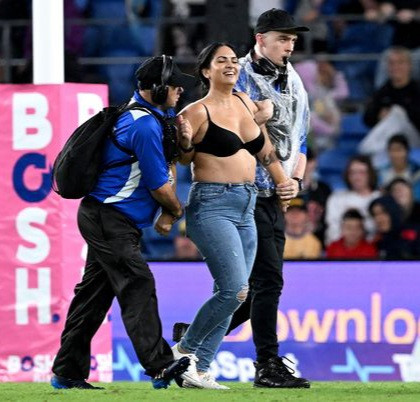 A topless woman who stormed the pitch during the Aussie rugby league match over the weekend has been branded a ”disgrace” by her boyfriend.

Javon Johanson interrupted the game between the Gold Coast Titans and the Parramatta Eels on Saturday,  April 9, after stripping down to her bra and storming the pitch – something she later claimed was on her “bucket list”.

She was eventually crash-tackled by a steward on the pitch.

After being escorted from the pitch and thrown out of the stadium, Johanson said she was happy to take her medicine.

“I got what I deserved. [The security guard] was doing his job,” she told Seven News. “I used to play AFL and rugby and I have three brothers, so getting tackled was not a problem.

“I know exactly what I did. It’s been a bucket list thing and when your friends say, ‘I dare you to do it’, you don’t actually think you’re going to do it. It was such a surreal, out-of-body experience,” she added.

“It’s the adrenaline of the crowd. You just hear this big roar and I was like, ‘I need to take off my top now’. I was so close to doing my bra but I was like, ‘No … that’s a bit far’.”

She also disclosed that her boyfriend had no idea that she was planning the stunt.

She added that he sent her a brutal text message afterward, saying: “You’re an idiot and a disgrace. Thank you for an absolute embarrassment. Don’t try contact me.”

She also captioned her TikTok post: “When your man doesn’t come to the footy but wakes up to this…”

A streaker has been crash tackled during an NRL match between the @GCTitans and the @TheParraEels on the Gold Coast. Dramatic video of the takedown has also emerged sparking calls for a review into the actions of the security guard. https://t.co/OF81oZXOfr #NRL #7NEWS pic.twitter.com/lsdwfKtyli

“I didn’t fail at marriage, instead I succeeded in divorcing myself from toxicity” – Daddy Freeze