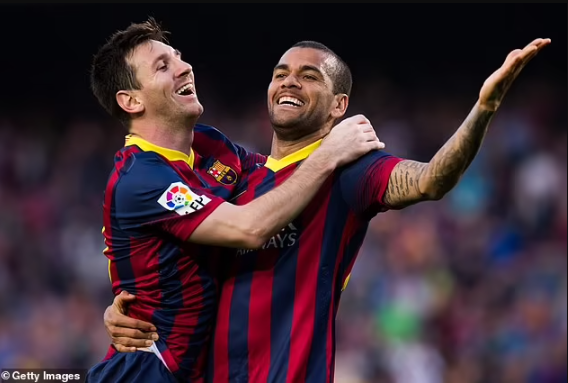 Dani Alves has once again pleaded with former team-mate Lionel Messi to return to Barcelona for a ‘last dance’ together.

Messi is still struggling to adapt to life at Paris Saint-Germain since joining the club after leaving Barcelona last summer.

The Argentine superstar has only netted three times in 27 domestic games for the French side this season.

His former team-mate Alves has called on Messi to return to the club having made his own comeback at the Nou Camp this season.

Alves said in an interview with Catalan media outlet Diario Sport: ‘I don’t know what he thinks or wants to do.

‘He could come back for a little year with me for a last dance. Why not?

‘There’s nowhere better than here. We cannot be better off than at Barca. He left and tried the experience. It’s time to return home if he wants.’

Messi enjoyed incredible success at Barcelona, with full-back Alves as they both  23 trophies together at the Nou Camp.

With several reports, that the Argentine superstar has failed to settle in Paris and at the club, he might leave the club and make a return back to Spain.

“I didn’t fail at marriage, instead I succeeded in divorcing myself from toxicity” – Daddy Freeze