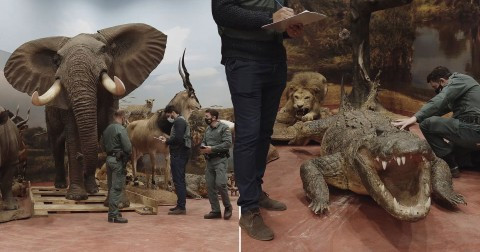 Spanish authorities seize stuffed endangered animals including elephant, cheetah and a lion worth £24,000,000

Spanish authorities have seized a huge collection of more than 1,000 endangered stuffed animals from a warehouse in Valencia.

The country’s national police force, Guardia Civil revealed the haul is one of the largest ever to be found in Europe, and is worth a whopping £24 million on the black market.

The collection also included the scimitar oryx, also known as the Sahara oryx – a stunning white antelope which was once widespread across North Africa.

According to a police statement issued Sunday, April 10, the warehouse owner is now under investigation for smuggling and crimes against the protection of flora and fauna.

‘In the next phase of the operation, the agents will proceed to analyse all the documentation provided by the author to justify the possession of the aforementioned pieces.’ The police added.