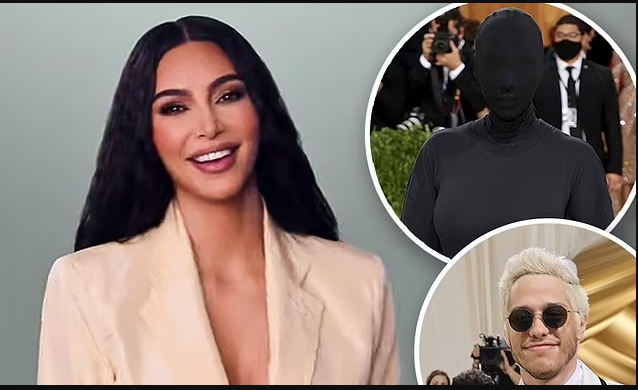 Kim Kardashian has shared details of a conversation she had with her boyfriend Pete Davidson when they both attended the American-themed Met Gala in Manhattan on September 13.

‘I ran into Pete Davidson at the Met,’ the 41-year-old mother-of-four confessed in the first episode of her Hulu spin-off The Kardashians.

Kim and Pete went on to share their first kiss during an Aladdin-themed skit, and he later gifted her their costumes and props on Valentine’s Day.

Speaking of the Costume Institute benefit, Hollywood Life is predicting the couple will finally make their relationship ‘red carpet official’ at the gilded glamour-themed gala in Manhattan on May 2.

‘Kim has been invited to the Met Gala and wants nothing more than for Pete to go with her as her date,’ an insider told the mag.

‘They were both invited by [chairwoman Anna Wintour] separately, as they have been in the past. Kim and Pete are ready to make their grand debut as a couple and they feel that the Met Gala is the perfect place to do it.’

Kim and Davidson made their first public appearance as a couple at The Kardashians premiere at Goya Studios in Hollywood last Thursday, but did not pose together on the red carpet.

‘He’s here to support me. It’s my thing. I don’t think it’s his thing to be all up here [one the red carpet] with me.’