A Nigerian man, identified as Taofeek Gbolagade, has been declared wanted by security officials after he was captured assaulting his pregnant wife in Ibadan.

The heart-wrenching incident occurred in the early hours of Tuesday, April 11, at their home located in Ogbere Housing estate, Ibadan, Oyo State, and a video of the incident has been shared online.

It was gathered that Taofeek, a Muslim, beat his wife to pulp over Sahur – a meal eaten in the morning before the day’s fasting begins. 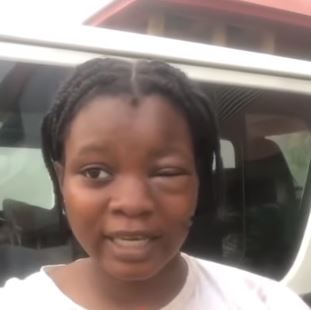 An eyewitness speaking on the incident said,

“This man always beats his wife over any little misunderstanding they have. I was able to record today’s event. He’s a Muslim so I think they had an argument over Sahur.

This man didn’t mind that she was pregnant with his second child and started punching on her. She wailed for hours before she was able to flee to her parent’s house. Meanwhile, Taofeek has fled his house after being declared wanted by security personnel.”

Watch the distasteful videos below,

I go kill you: White man threatens yahoo boys trying to scam him