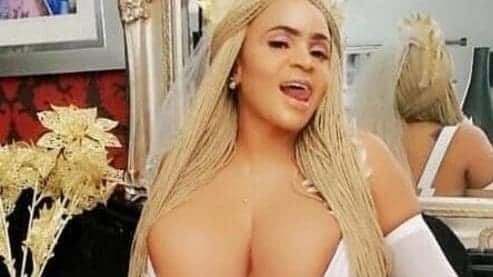 The busty movie star who sometime ago dumped her fiancé on social media said she feels the urge for sexual intercourse anytime she sees money.

“Money makes me wet ……. My drink combination was crazy 😂Azul… Remi.. Henessy… shisha. . Ballon … Well we have fully recovered from the hangover 😃😝❤️ incase your wondering why I didn’t preach last Sunday,” she captioned a party video she posted.

Recall that Cossy Orjiakor had spilled the real reasons she called it quits with Abel Jürgen Wilhem, her Nigerian-German fiancé.

The Anambra State born diva dumped ex-lover in December 2020, despite their earlier plans to tie the knots in 2021.

According to the self acclaimed Barbie Girl, their relationship was all smooth and sailing until her partner started taking advice from his friends.

“We had a little misunderstanding and the rule was that if one party offended the other, the guilty person would do a frog jump. I also do it when I am wrong. However, he refused to do the punishment when he erred because his friends told him not to. But I have forgiven him,” she said, adding, “My relationship with my ex-lover went sour because we allowed too many people to have a say in the relationship.  Both of us are on talking terms and I have asked him why he said some false things about me on Instagram. He told me he had deleted the false claims from his page. When I leave a man, I do not try to go back to him. I try to leave in peace and avoid being enemies with my past lovers. I guess he was just trying to get attention. I think he did that to me because he was still mad at me.”

Ojiakor also revealed that though she wishes to get married soon, she would not change her lifestyle to suit her husband.

She said, “I want to settle down but I am not in love with any man at the moment. As a matter of fact, I may end up adopting a child, instead of having a baby for a man I am not in love with. I do not intend to change my life because of marriage. Nothing will stop me from being Cossy. My husband has to take me the way I am.  I can only stop because of God and not because of any human being.

Jubiliation as Davido and Chioma settles dispute, refollow each other on Instagram