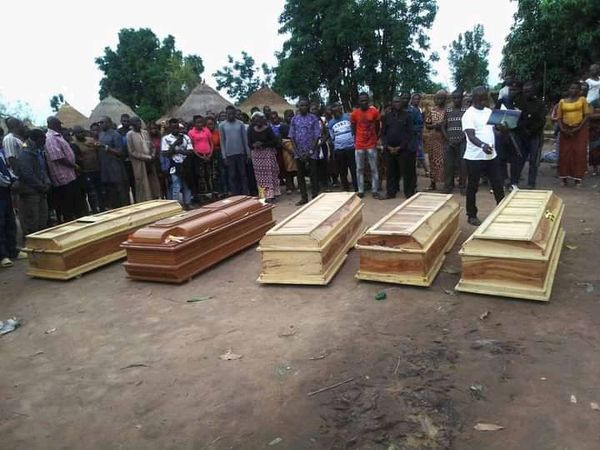 Update: “Rise up in self defence”

Five of the victims buried today

A devastated Benue state Governor Samuel Ortom has again lamented over the gruesome murder of 23 persons in fresh attacks on two communities by marauding Fulani herdsmen.

LIB had reported that 12 persons including women and children were slaughterd by Fulani herdsmen in Tiortyu in Tarka local government area of the state on Monday night  April 11. The death toll has so far since risen to 15.

The Chief Press Secretary to the governor, Nathaniel Ikyur, in a statement on Tuesday, April 12, said no fewer than 8 other persons were mowed down same night by Fulani herdsmen who invaded Mbadwem in Guma local government area.

Scores of others were injured and are receiving treatment in unnamed hospital in the state.

Ortom who charged his people to rise up to defend themselves forthwith.

“It is becoming increasingly glaring everyday that my people are now an endangered specie and so we can no longer wait for help from anywhere. My people will have to rise up to the occasion to defend themselves and their heritage against the Fulani army of occupation,” he said.

“We are law abiding citizens. We have cried for help against these invaders but nothing is forthcoming. We are left alone and it looks like it is a deliberate strategy. Now we have only one option; to defend ourselves or get extinct. This is a case for our survival

“We have been accommodating of other people in our land but our hospitality is misconstrued as weakness. We are not a conquered people. We will never be. We are free born citizens of Nigeria”, the Governor declared.

Governor Ortom nevertheless enjoined security operatives to do more in crime prevention and protection of lives and property in the land just as he urged the people to cooperate with security agencies to flush out the undesirable elements in the society.

The state government, he said, will not shy away from its commitment to provide welfare and the security for the citizens.