Nollywood actress, Ini Edo showed off her gigantic backside as she displayed her dancing moves at her colleague, Rita Dominic’s bridal shower recently.

Rita Dominic who is set to tie the knot with her lover, Fidelis Anosike on the 18th and 19th of April, had a lovely bridal shower with lots of highly-rated thespians in attendance.

The bridal shower was attended by the some of the female movers and shakers in the Nigerian movie industry including actresses, Joke Silva, Chioma Chukwuka, Michelle Dede, Ego Boyo, Ini Edo, Kate Henshaw, Dakore Egbuson-Akande and media mogul, Mo Abudu amongst others.

Ini Edo who was present is seen in a video vibing on the dance floor in a gown that perfectly outlined her shape. Her massive backside which came on display however became a subject for netizens as they concluded that she underwent butt surgery but her doctor did a terrible job.

Here’s how some netizens reacted upon seeing her video, 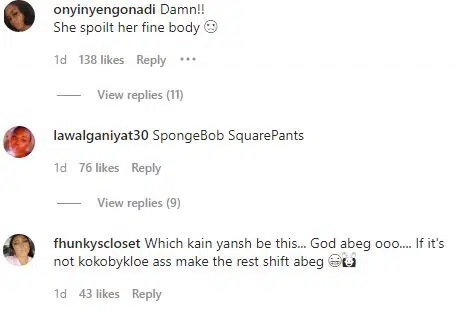 Nigerian man arrested in connection with seizure of heroin worth N1.2m in India