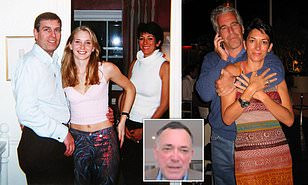 The brother of convicted sex trafficker, Ghislaine Maxwell has claimed that UK Royal, Prince Andrew had ‘no option’ but to settle with his rape accuser Virginia Roberts.

Speaking with DailyMail journalist Jay Beecher, Ghislaine’s brother, Ian Maxwell said Andrew had to settle Ghislaine Maxwell financially in order to ‘do the best he could’ by his mother, Queen Elizabeth II.

He said Miss Roberts’ allegations of sexual abuse against the Duke of York would have caused the British monarch such ‘immense pain’ that Andrew was forced to ‘fold his tent’.

Andrew, whose reputation has been tattered paid £12million out of court to settle claims by Jeffrey Epstein’s ‘sex slave’ Giuffre Roberts that he had sex with her when she was 17 – allegations that he has always denied.

An important evidence in Miss Roberts’ case was a picture taken in 2001 showing Andrew with his arm around Miss Roberts at the London home of disgraced socialite Maxwell, Epstein’s ‘madam’ and a friend of the duke. Maxwell could be seen hovering in the background of the photo.

Ghislaine Maxwell was found guilty in December 2021 of grooming and trafficking underage girls for Epstein.

Days after her conviction, her attorneys requested a new trial because ‘Juror 50,’ referred to as Scotty David, told newspapers he had been sexually abused as a child, but had not disclosed the information during jury selection, as required. Two weeks ago, a New York judge denied Maxwell’s request.  .

Asked for his opinion on Andrew’s settlement with Miss Roberts, Mr Maxwell, 66, said: ‘I suppose we are never really going to know because it’s Prince Andrew, and it’s all been swept away. This is the Jubilee year of his mother, he is a dutiful son. This really causes her – it’s obvious it would any mother – causes her immense pain, he’s just exceptionally embarrassed. He doesn’t want to do anything to upset the year, and I think that he had to fold his tent, really, and do the best he could by the Crown.

He also suggested the Me Too social movement against sexual abuse and harassment had also played it’s part in Maxwell’s guilty verdict last December.

‘But we know in this country, that so called victims turn out not to be victims, Carl Beech (invented claims of widespread establishment sex abuse) would be the finest example of that.

‘These kinds of things go on and jury verdicts have been overturned time and time again and obviously we hope this is going to happen on this occasion as well.

‘All this forms a powerful package of appeal points that for me show this trial was not fair, with on top of that the lying juror.’

‘My sister has been banged up now, it will be two years in July, she is in horrendous incarceration, she is in isolation, she is on suicide watch, she continues to have torches shone in her eyes every 15 minutes to make sure she is still breathing.

Maxwell is due to be sentenced in June.