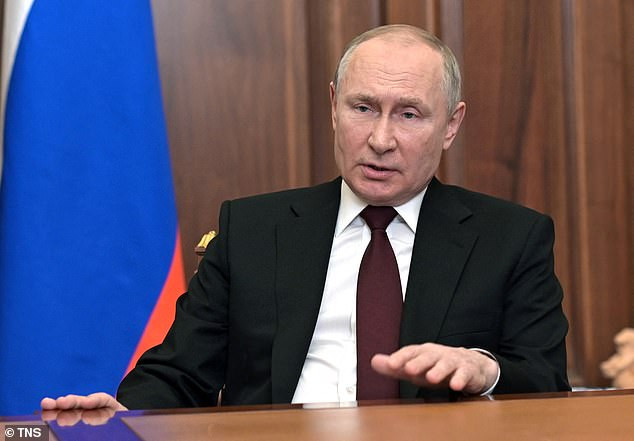 Russian leader Vladimir Putin could consider striking a NATO base in order to stop the transfer of arms to Ukraine, a former British security chief has warned.

Lord Ricketts, the UK Government’s first national security adviser, said that Putin is becoming ‘increasingly desperate to choke off the flow of arms’ to Ukraine.

Lord Ricketts even suggested that Putin could attack aircraft or convoys headed to the country from NATO.

He fears the war is moving towards ‘an angry stalemate, where Russia will hold on to quite a large part of the country’ and Ukraine will not agree a settlement deal.

He also warned that the conflict could continue for ‘years and years to come’ as a guerrilla war like an ‘open wound in the middle of Europe’.

‘I suppose what President Putin wants us all to fear is that he might want to use a nuclear weapon in Ukraine, which would be a momentous escalation and ensure Russia was isolated around the world,’ he said to the BBC on Sunday, April 17.

‘More likely, I think what they’re looking at is some way of preventing or limiting this flow of arms into Ukraine, keeping the Ukrainian Armed Forces going.

‘So we may see attacks on convoys or aircraft bringing the arms in from the west.

‘I think what they’re looking at is some way of preventing or limiting this flow of arms into Ukraine, keeping the Ukrainian Armed Forces going,’ he warned.

Lord Ricketts warning comes asUkraine’s president, Volodymyr Zelensky said that it is important for Russia not to win any territory in the Donbas region.

‘This is why it is very important for us to not allow them, to stand our ground, because this battle… it can influence the course of the whole war,’ he told CNN.

‘I don’t trust the Russian military and Russian leadership.

‘That is why we understand that the fact that we fought them off and they left, and they were running away from Kyiv — from the north, from Chernihiv and from that direction … it doesn’t mean if they are able to capture Donbas, they won’t come further towards Kyiv.’

The Ukrainian president has also urged the West to prepare for a nuclear attack from Mr Putin. He said that the Russian leader may consider tactical attacks if his war stalls any further.

‘We shouldn’t wait for the moment when Russia decides to use nuclear weapons… We must prepare for that,’ he said.

‘Chemical weapons, they should do it, they could do it, for them the life of the people, nothing. That’s why.

Osinachi: “I will gather brothers to beat any church member that assaults his wife” – Apostle Suleman