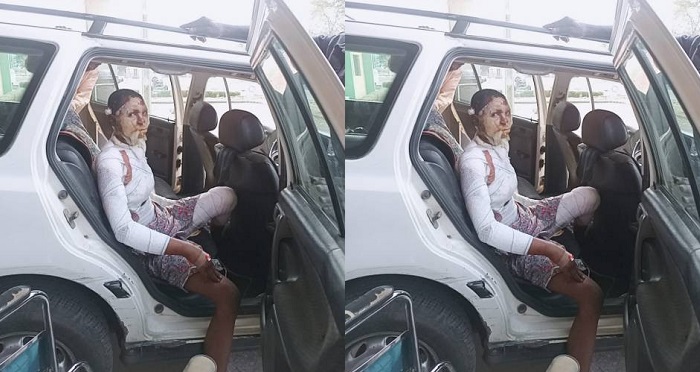 A middle-aged man identified simply as Kuryanga has been accused of setting his estranged wife, Janet John, on fire in Guyuk town in the Guyuk Local Government Area of Adamawa state.

According to the report by Sahara Reporters, family sources reveal that John and Kuryanga terminated their 7-year marriage three years ago, with a court order prohibiting him from seeing her due to his violent behaviour. John’s aunt, Noyina, revealed that despite a court order restraining him, Kuryanga kept on threatening Janet.

Noyina stated that armed with Premium Motor Spirit, also called petrol and matches, Kuryanga, allegedly attacked and set ablaze his estranged wife while she was asleep.

“Despite getting married to another lady coupled with the court verdict, Kuryanga still refused to let go of her (my niece). Since then, he’s been jealous, threatening her life and those of her suitors.

After he eventually struck, he still joined sympathisers at my niece’s bedside in the hospital the following day. He almost got away with it, fortunately, his pregnant wife later confirmed that a container of petrol left at the crime scene belonged to their family.

He tiptoed to her sleeping area within our compound in the dead of night, poured petrol, struck the matches and fled; leaving her in flames. He got her because of the scourging hot weather. We all sleep in the open” Noyina said

Speaking further, Noyina said “It was terrifying to wake up to see the burning; it was like a typical horror movie scene. It was more torture to hear my niece’s cry for help while she burnt”

According to the distraught aunt, Kuryanga has been arrested and he confessed to the crime and pleaded for understanding.

‘I would rather work for 10k than beg for 10million,’ Actor Yul Edochie brags after losing a wristwatch worth N300k on a movie set