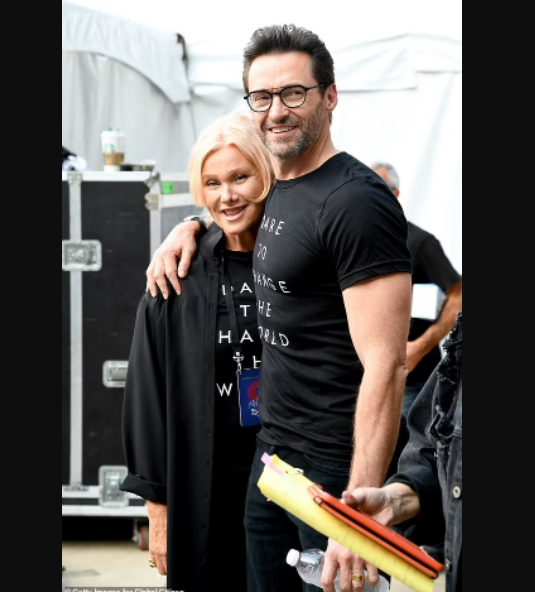 The 66-year-old, who has been married to the actor, 53, since 1996, spoke about the rumors during a podcast interview this week.

Speaking on the Not an Overnight Success podcast, Deborra-Lee described the baseless rumour as ‘so silly,’ saying: ‘I mean, hello guys – if he was gay, he could be gay!

‘He didn’t have to hide in the closet anymore, and he’d be dating Brad Pitt, or whatever. Not that Brad’s gay, but you know what I’m saying!’

She continued: ‘It’s so silly, and then people perpetuate silly things and it’s boring.’

Elsewhere in the interview, host Gus Worland asked the Australian actress how the pair react when watching the other star in intimate on-screen moments.

‘What’s it like when you’re doing a love scene in the movie, and Jacko’s watching and vice-versa?’ he asked.

But when it comes to watching her husband, she added: ‘When I’m sitting in the theatre watching – especially if I’m with the kids – I feel a little uncomfortable.

‘But also, a lot of the times I’m very good friends with the actress he’s making out with as we’re making a film, we all get to know each other.

‘Sometimes its weird seeing it, and I think the kids are like, “Ahh!” [Oscar, their son] doesn’t want to watch.’

She sweetly concluded: ‘[But] when you’re in a relationship, that’s just all fluff, you know? It’s all fluff.’

Musician killed as security operatives and gunmen clash in Imo