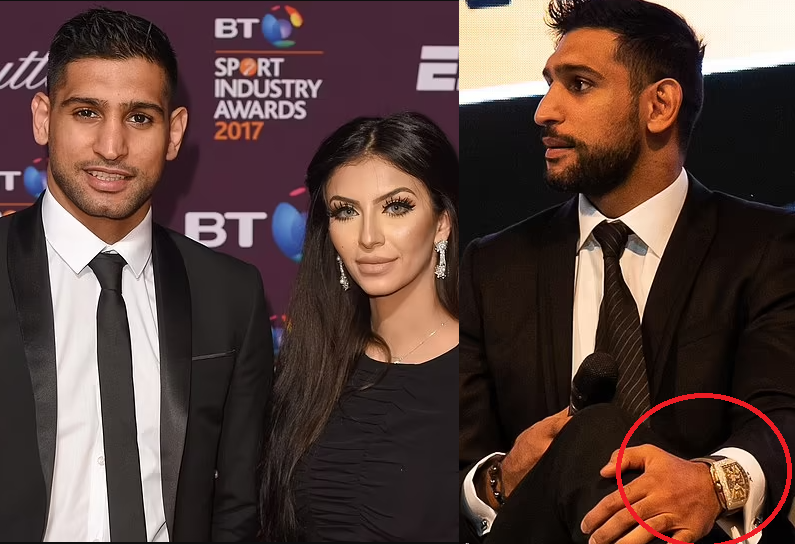 Boxer Amir Khan robbed of his £72,000 luxury watch at gunpoint while out with wife Faryal Makhdoom in London

Former world champion, Amir Khan was robbed of his £72,000 luxury watch at gunpoint by two thugs while out with his wife in East London last night.

The 35-year-old boxer has claimed that a gun was pointed in his face as his assailants stole his Franck Muller Vanguard Chronograph before speeding off in a car in Leyton at around 9.15pm.

The former boxing world champion took to Twitter to share details of the incident, noting that he and his wife were both unharmed.

Khan said: ‘Just had my watch taken off me at gun point in East London, Leyton.

‘I crossed the road with Faryal, luckily she was few steps behind me. Two men ran to me, he asked for my watch whist having a gun pointed in my face. The main thing is we’re both safe.’

Hours before the incident, Khan was pictured with a fan while shopping in Oxford Street wearing his flashy watch, which is worth around £72,000 and is studded with 719 diamonds.

An eyewitness told The Sun that Khan was visibly shaken by the ordeal, adding: ‘They were not hanging around. They got straight into the car and fled.

‘Amir had enjoyed a lovely evening with his wife and had been shopping earlier in the day. It raises real fears he was a deliberate target. It’s extremely serious. He was left absolutely terrified.’

In a post to her Instagram account late last night, Khan’s wife Makhdoom posted the serial number of the said watch in a bid to try and ‘find out who’s done this’.

‘A man aged in his 30s is alleged to have been approached by two males who threatened him with a firearm before stealing his watch and fleeing. There were no reports of any shots fired or any injuries.

‘Police responded and conducted an area search. At this very early stage there have been no arrests. An investigation has begun and police are following a number of enquiries.’

Khan and Makhdoom, who got married in 2013 in New York, have three children, Lamisah, Muhammad and Alayna.

Put away your clerical garb, join politics and let’s see how far you can go