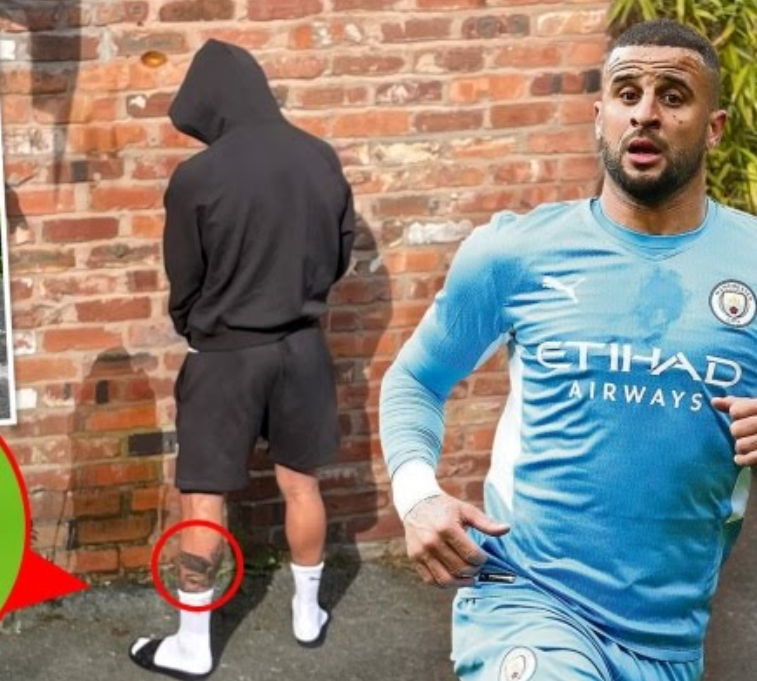 According to the Sun UK, Walker was pictured urinating against the wall on Sunday, 17,  24 hours after Manchester City lost 3-2 to Liverpool in their FA Cup semi-final.

Onlookers said Walker looked around before pulling up his hoodie and urinating.

One witness reportedly spotted Walker’s leg tattoos when he peed at The Bridge in Prestbury, Cheshire, at 3.25pm.

He told The Sun: “I had just arrived for a meal with my family and suddenly I’m watching Kyle Walker, who I instantly recognised, p***ing against a wall. It was revolting.

“It wasn’t just a quick wee. He was there for ages. We were appalled.

“Before he did it, he was looking around to see if anyone was there, then he pulled up his hoodie but was still recognisable from his tattoos.”

The source added: “Kyle was outside in the beer garden. It was a beautiful day.

“But rather than head indoors and use the lavatory like the rest of us, he chose to walk through an archway to relieve himself against the wall — in full view of paying guests and people coming and going in the car park.

“The hotel charges £260 a night for rooms and entertains well-heeled locals.

“He could be clearly seen from the windows. It isn’t something you would want if you were staying there.

“Millionaire players sometimes get a bad rap and it’s easy to see why when some make up their own rules.”

“Beating children has never led to discipline. If beatings worked, Africa will have the most well-behaved adults” – Reno Omokri

Michelle Obama reveals her daughters Sasha, 20, and Malia, 23,  have boyfriends; says she marvels at them ‘bringing grown men home’