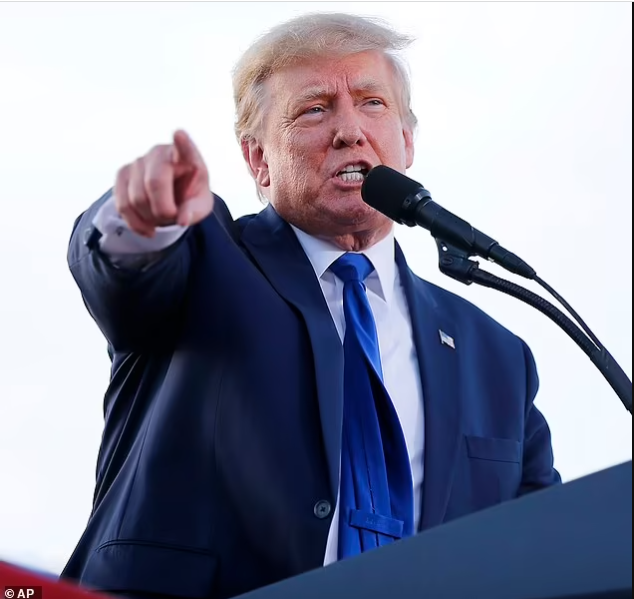 Judge holds Trump in contempt and fines him $10,000 a day in New York Attorney General’s probe

A New York judge held former President Donald Trump in civil contempt of court and ordered him to pay $10,000 a day until he turns over documents that have been subpoenaed by the state attorney general’s office.

Attorney General Letitia James had sought the fine as a way to force the former president to turn over documents her investigators say they need as part of their civil probe into the Trump Organization’s business practices.

‘Mr. Trump, I know you take your business seriously, and I take mine seriously, I hereby hold you in civil contempt and fine you $10,000 a day’, said New York state Supreme Court judge Arthur Engoron.

James said ‘justice prevailed’ on Monday in a celebratory statement after the ruling.

‘For years, Donald Trump has tried to evade the law and stop our lawful investigation into him and his company’s financial dealings. Today’s ruling makes clear: No one is above the law,’ the state attorney general said.

James is investigating whether the Trump Organization, the former president’s real estate empire, misstated the values of its real estate properties to obtain favorable loans and tax deductions.

She said her probe had found ‘significant evidence’ suggesting that for more than a decade the company’s financial statements ‘relied on misleading asset valuations and other misrepresentations to secure economic benefits.’

She also accused the ex-president of missing a mutually agreed-upon deadline to hand over eight personal financial documents — which Trump’s attorneys claim he simply does not have.

James asked that Trump be fined $10,000 a day, and perhaps more until he complies.

She accused him of ‘more delay and obfuscation’ in his excuses for not handing over the documents in question, arguing the daily increasing fine is necessary to ‘compensate’ her office ‘for its fees and costs associated with this motion,’ according to an April 7 court filing.

Trump has repeatedly denounced James’ probe as a ‘witch hunt’ and accused her of acting out of political bias.

Trump attorney Alina Habba called James’ contempt request a ‘publicity stunt’ in an April 20 filing and claimed the onus was on his family business to produce the documents.

After a ‘dutiful search’ for what prosecutors were seeking, Habba said he ‘simply did not have any of the requested documents in his personal possession or custody.’

Instead, she claimed ‘all potentially responsive documents were in the possession, custody or control of the Trump Organization.’

She pointed out her client ‘was not obligated to produce documents’ in the company’s control.

The attorney general has questioned how the Trump Organization valued the Trump brand, as well as properties including golf clubs in New York and Scotland and Trump’s own penthouse apartment in midtown Manhattan’s Trump Tower.

Habba said at the Monday hearing that James’ investigation was a ‘fishing expedition’ and that the Trump Organization was ‘right on schedule’ with its production of documents.

‘This is a political crusade,’ Habba said. ‘The attorney general’s investigation has seemingly become aimless.’

Trump, a Republican, denies wrongdoing and has called the investigation politically motivated. James is a Democrat.

Trump, Ivanka Trump and Donald Trump Jr., were also subpoenaed and ordered by Engoron, the same judge, to provide testimony to the attorney general. An appeal is pending for that testimony.

Claims that these malnourished Lions were spotted at Jos Wildlife Park is False.