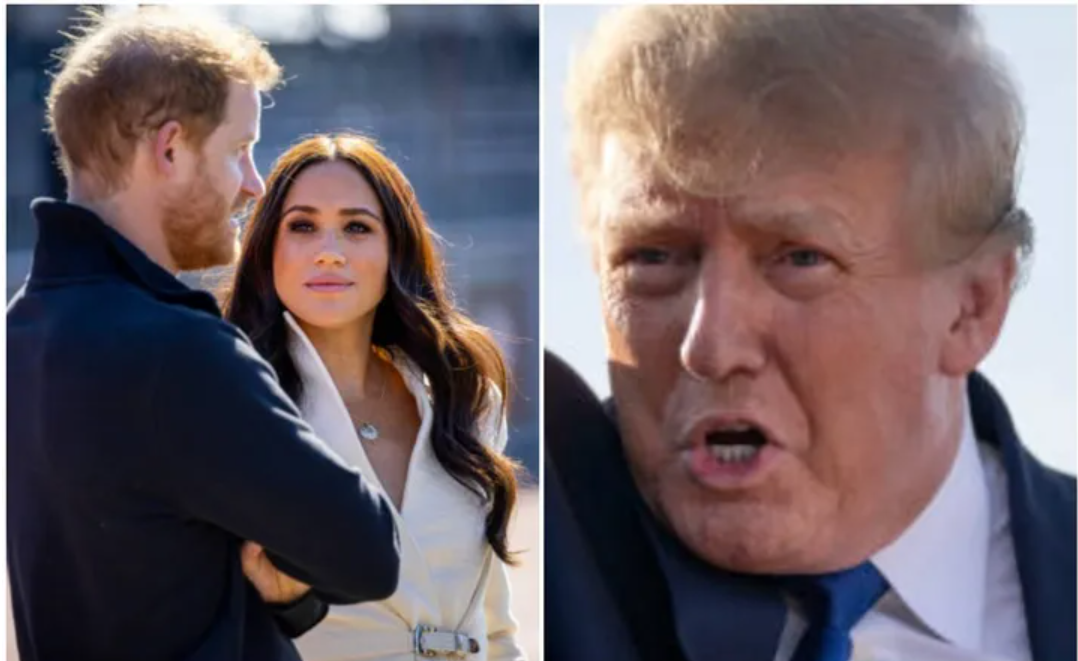 Meghan Markle and Prince Harry will end bad, he’ll get bored or she’ll like another guy

Former President Donald Trump has said that Prince Harry is “whipped” and has also predicted that his marriage to Meghan Markle will “end bad.”

The ex-President blasted the couple’s high profile relationship during a sit down with Piers Morgan in his exclusive TalkTV interview which will air on Monday evening, April 25.

In the interview, Mr Trump said that the former royals’ marriage is a ticking time bomb, which will blow up when “Harry decides he’s had enough of being bossed around.”

The Sun reported that the former president said that Ms Markle might leave Harry “when she decides that she likes some other guy better”.

“I’m not a fan of Meghan, and I wasn’t from the beginning. Poor Harry is being led around by his nose. And I think he’s an embarrassment,” he was quoted as saying.

DT: I do. I’ve been a very good predictor, as you know. I predicted almost everything. It’ll end and it’ll end bad. And I wonder if Harry’s gonna go back on his hands and knees back into the beautiful city of London and say, please. You know, I think Harry has been led down a path.

DT: I’m not a fan of Meghan, and I wasn’t from the beginning. Poor Harry is being led around by his nose. And I think he’s an embarrassment. And I think when she spoke badly of the Royal Family, but in particular the Queen you know, I met the Queen. It was supposed to be for 20 minutes.

PM: I saw you just after you saw her.

DT: Right. It was supposed to be just a quick meeting. And it was beautiful. The pomp and ceremony, nobody does it like the English I don’t know what it is. But nobody does it.

PM: We have a certain style.

PM: You know, here’s my issue with it. I think that they’ve quit the country, they quit royal duty, they’re living in luxury and California. They want to use their royal titles to exploit them for massive financial gain. Without any of the duty that comes with the royal titles. I don’t think you can have your royal cake and eat it. That’s my argument about it.

PM: When I heard he wasn’t going to Prince Philip’s memorial…

PM: I couldn’t believe that he would not  go to that. He was at the Super Bowl. He was at a Texas rodeo. But he couldn’t find time to get on a plane.

PM: When he died. I think it was a devastating moment for the Queen.

DT: I think they had a great relationship. But he was a strong guy and never forget a little moment, right? And he just said, ‘No, you move back’. And he didn’t say it in a nice way. Because the photographer was pushing everybody around a little bit foolishly. But I thought it was terrible when Harry didn’t go to the memorial of Prince Philip. Yeah, I think the Harry situation is going to unfold in a much different way.

PM: If you were the Queen, is it at the stage now, would you remove their royal titles?

DT: I would. The only thing I disagree with the Queen on probably one of the only things ever is that I think she should have said, if that’s your choice, fine. But you no longer have titles, you know, and frankly, don’t come around where you’re just, because her loyalty is to the country. She said that many times. Her loyalty is to the country. And I think that he has been so disrespectful to the country, and it’s a great country. I own a lot of things there. I own a place called Turnberry and in Aberdeen I own and, I mean we have Aberdeen is beautiful the oil capital of Europe and I own things there and I love that country. It’s incredible, in Scotland, I love Turnberry, I love what I did there. I built things there.

DT: Harry is whipped. Do you know the expression?

PM: I’m familiar with the phrase.

DT: I won’t use the full expression but Harry is whipped like no person I think I’ve ever seen.

PM: The most whipped man in the world.

DT: I dunno, that’s gonna be a big one, but he is a whipped man.

This is not the first time that the former president has taken a swipe at the Duchess. Earlier in December he had claimed that she had been “disrespectful” to the British royal family and insisted that Prince Harry has been “used horribly”.

The full segment of “Piers Morgan Uncensored” is scheduled to air on the Fox Nation streaming service. The chat had already grabbed headlines after Morgan said Trump walked out of the interview when the British journalist confronted him on his election “lies.” Morgan called him “pathological.”

‘Grief is something you live with forever’

“Nigeria has trapped your body, don’t let it trap your brain” Daddy Freeze slams followers insisting that women must be submissive to their husbands