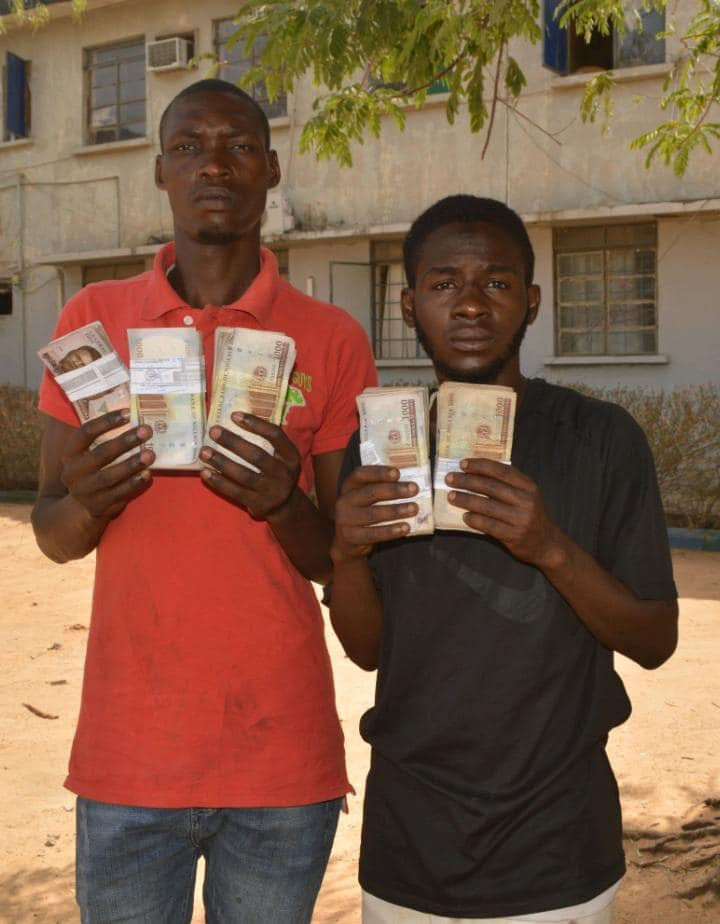 Operatives of the Kano State Police Command have arrested two suspected thieves and recovered N500,000 they stole from bank customer.

Spokesperson of the command, SP Abdulahi Haruna Kiyawa, who disclosed this in a statement on Monday, April 25, said the suspects belong to a criminal syndicate that position themselves in and around Automated Teller Machine (ATM) locations in the state to dispossess unsuspecting bank customers of their money.

“On the 21/04/2022 at about 1100hrs, a distress call was received from a resident of Ja’in Quarters, Kano Municipal LGA that on the same date at about 1000hrs, he withdrew the sum of Five Hundred Thousand Naira (N500,000:00) from UBA located at Sharada Quarters Kano with intent to pay the salaries of Islamiya School Teachers,” the PPRO stated.

“He put the money inside his Motorcycle. On his way to layin Ganduje Sharada, he entered a nearby shop to buy some goods. When he came out, he discovered that the money was removed. He immediately raised an alarm and contacted the police through the Command’s emergency number (08032419754)

“On preliminary investigation, the suspects confessed that they operate as a syndicate, they went to UBA Sharada Quarters and monitor those withdrawing money from the Bank. Having realized that the man withdrew a huge amount of money and put it inside his motorcycle, they trailed him with their Motorcycle.

“When he stopped to buy goods from a nearby shop, they removed the money from the motorcycle and zoomed up on their motorcycle where they were trailed and arrested.”

The Commissioner of Police had directed that case be transferred to the Command’s Criminal Investigation Department for discreet investigation, after which the suspects will be charged to court for prosecution.

The CP reiterates that criminals will have no hiding place in Kano State. He advised them to either repent or leave the State completely.

He urged residents to report incidences to the nearest Police Station and not take laws into their hands.