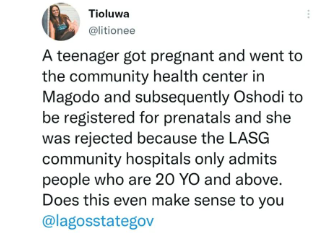 Two health centers in Lagos have been accused of refusing to attend to a pregnant teenage girl.

A Twitter user @litionee who made the allegation said the teenager was referred to the Oshodi Health center for her antenatal care, however, she was allegedly rejected. She went to the Isolo health center where she was also allegedly turned down by the officials on grounds that they only attend to pregnant ladies from 20 years old and above.

Read her tweets below

Russia is trying to blackmail Europe with gas supply