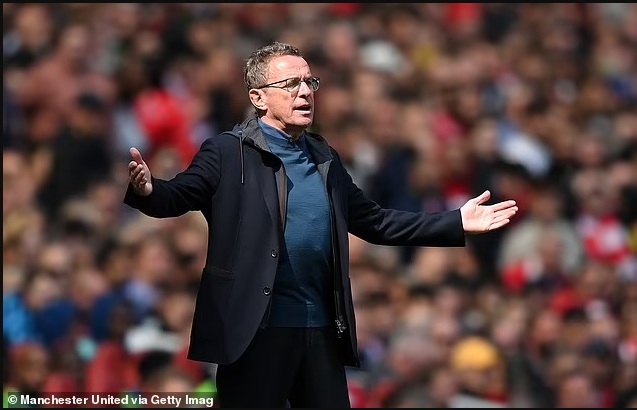 Man. United’s interim manager, Ralf Rangnick says the club only have 14 players fit as he begs the stars to impress Erik ten Hag by beating Chelsea

Manchester. United’s interim manager, Ralf Rangnick has confirmed that the club will be with  just 14 fit senior players for Thursday night’s clash with Chelsea after Harry Maguire and Jadon Sancho joined the injury list.

Manager Ralf Rangnick previously admitted that his team’s chances of finishing in the top four and qualifying for next season’s Champions League are slim.

Speaking on the availability of players, Rangnick said: ‘Fred is unfortunately not yet available. He tried to train yesterday and afterwards I had a conversation with him and with a player like Fred it doesn’t make sense with a muscular injury to play him too early as he would take the risk of re-injury.

‘They should have the chance to play well and perform well, it should be the right moment.

‘We will try to play the best possible team. Right now we have 14 in our pro team and the youngsters available and three or four [young] players will be part of the squad.

With matches against Chelsea, Brentford, Brighton and Crystal Palace left to come, and United needing to make up six points to finish in top 4, Rangnick urged ‘realism’ about their situation.

He said: ‘I don’t think it makes sense to speak and speculate about the Champions League. We need to be realistic.

‘Even if we win four games, it’s not in our hands. Even for next season, it’s important to finish on the best possible note.

‘We have four more games to play. The next two are at home and obviously we will try to get as many points and win as many games as we possibly can.

‘In order to do that, we need to play on the best level we possibly can. We know if we play well, it’s possible to win the game tomorrow.’