A Nigerian Pastor who has been identified as one Ade Abraham of Christ High Commission Ministry, also known as Royal Christ Assembly, Kaduna State, has stunned many after he is said to have convinced his church members to relocate to a camp in Ekiti State with him in order to “prepare for the end of the world” and also allegedly charging them N310k to ‘fly them to heaven’.

A church member who spoke with FIJ, Pastor Abraham first relocated to Ekiti State from Kaduna State, where he was based before in 2020.

When he returned to Kaduna State in April, he allegedly asked members of his church to pay him N310,000 before they can be allowed to follow him to Omuo-Ekiti, where “the gate of heaven will open for all of them to fly to heaven”. He allegedly assured his members that they would all ‘ascend to heaven together from the location in Ekiti’.

A source said to the news outlet;

“My relative has also asked her daughter, who is studying abroad, to return to Nigeria, or else the pastor (Abraham) would make her commit an offence over there that would see her go to jail.”

A WhatsApp chat also backed the claim as it captured what the pastor’s follower told her daughter.

“Daddy Abraham said I should tell you to come back, that he is the one who makes you to come down to Nigeria, and I was the one who gave you the chance to return back there, that I should also know how you will come back or he will make you to commit an offence over there and they will put you in prison. That he probably send you down so you will achieve your goals.

“Please Elizabeth, if there is how you will help yourself to come back, I will be glad. Don’t let daddy put any one of you in trouble.”

A different member of the church who currently is in the camp in Ekiti revealed that Abraham’s campers still go about their normal businesses on regular days.

The follower stated that “saved members” left their “past lives” behind in Kaduna just so they could join the pastor in Ekiti on April 6. The member confirmed that they would be at the camp with the pastor “until the day of rapture”. 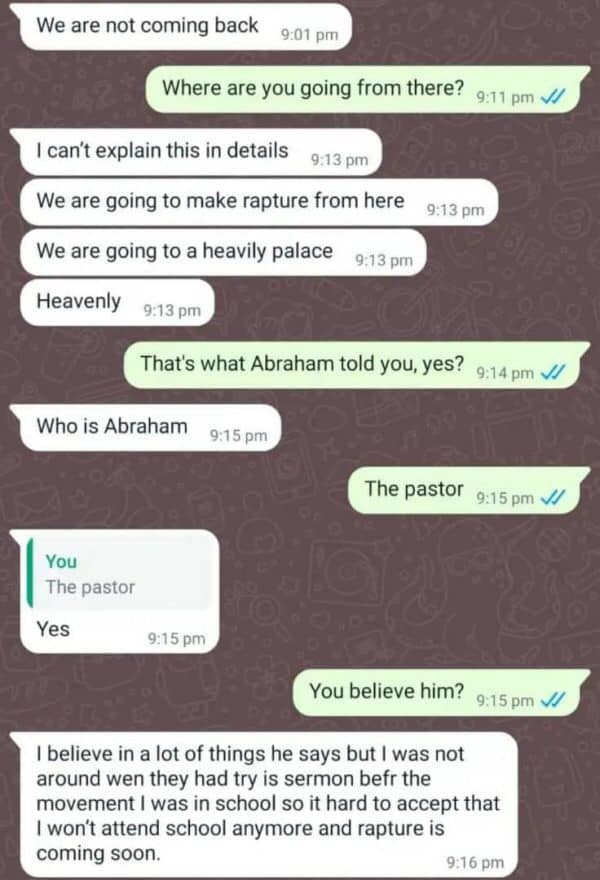 According to the member, Abraham still holds regular church services on Sundays and Wednesdays.

“We are not coming back. I can’t explain in details.

Watch the videos as you scroll,

I may not have gotten to where I am if I were tall – Diminutive actor, Yaw Dabo slams those mocking his height