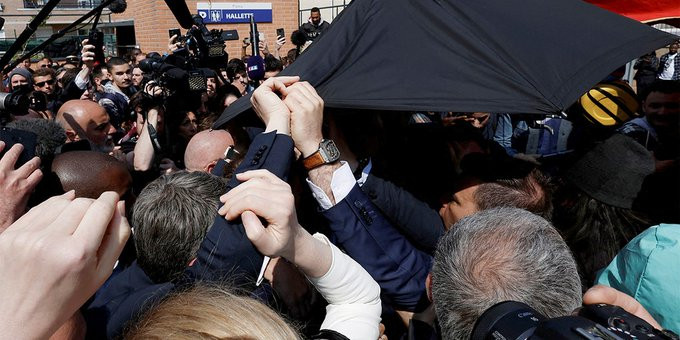 French President, Emmanuel Macron had a security scare on Wednesday, April 27 as he was pelted with tomatoes and a protester attempted doing a body slam on him, just days after was re-elected.

Macron was at a small market northwest of Paris, when things turned rowdy and some protesters started pelting tomatoes at him, but the French Secret Service protected him using £8,000 Kevlar bullet proof umbrellas.

A trending video shows Macron try to calm the boisterous crowd as the Secret Service try to protect him while a woman screams in the melee.

Macron, 44, seemed oblivious to the near-miss until someone in the crowd shouted ‘projectile’ and the secret service immediately shielded him with a special umbrella – known as the paraPactum – that can withstand attacks by knives, acids dogs and bullets.

Another snippet of video, shot from a different angle just after the tomatoes were thrown, showed a man clambering onto a table or another object and trying to body slam towards the direction of Macron.

It was Macron’s first public appearance since his re-election victory over far-right candidate Marine Le Pen on Sunday April 24.