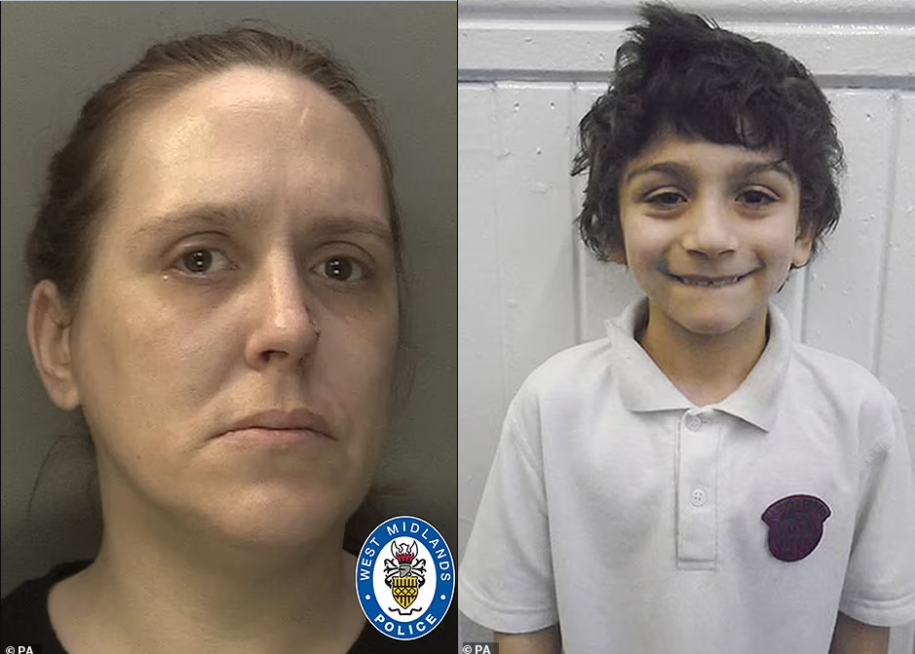 A heroin addict mother who used her severely asthmatic son’s inhaler as makeshift pipeto smoke crack has been jailed for 20 years after the child died alone and ‘gasping for air’ in the garden.

Laura Heath’s son, Hakeem, was found dead in a garden in Birmingham in November 2017 after suffering a severe asthma attack. His ‘freezing’ body was discovered clutching a leaf outside a flat where he was staying with his mother and where Heath smoked heroin and crack cocaine in his presence.

According to Mail Online, Laura Heath used foil and an elastic band to rig one of her son’s blue inhalers to smoke crack. The addict had a £55-a-day habit and her son was found to have inhaled tobacco smoke in the hours before his death, having also been exposed to heroin, crack cocaine, and cannabis through second-hand smoke.

Police believe her son had let himself out of the flat sometime after 10.30pm because of drugs smoke – but he then died gasping for air in the garden and his body, already stiff from rigor mortis, was found at 7.30am the following morning.

Passing sentence on Laura Heath, Mr. Justice Dove said the death of Hakeem Hussain, seven, in November 2017 in Birmingham was the result of her ‘catastrophic and deplorable’ parenting.

Mr. Justice Dove told Heath as she stood impassively in the dock at Coventry Crown Court today: ‘You betrayed the trust of all children who have to place their trust in their parents to do the best for them and you catastrophically failed to act as a responsible mother.

‘All of these offences were committed while you were under the influence or indeed in the thrall of drugs, in particular heroin and crack cocaine.

‘Your addiction no doubt led to you prioritising your drug use over almost everything else in your life. You should have followed Hakeem’s advice and stopped taking drugs. You didn’t.’

Hakeem died less than 48 hours after social workers failed to act on a school nurse’s plea to immediately remove the boy from Laura Heath’s care before the weekend he died because his life was in danger. Following the meeting she messaged a friend saying: ‘Hakeem is on child protection… neglect… hey ho… gonna do what I gotta do.’

Months after his death, Birmingham’s failing social services department was taken over poor performance dating back to 2008 when three other children on their radar where either beaten or starved to death by their parents.

The judge told 40-year-old Heath, who was ordered to serve two-thirds of her 20-year sentence before becoming eligible for parole, that the death had occurred after her life ‘entered a drug-fuelled downward spiral into squalor, chaos, and tragedy’.

Mr. Justice Dove said: ‘When Hakeem Hussain died he was only seven-years-old.

‘It is clear in his tragically short life Hakeem had been an inspiration of happiness and affection for people who knew him.

‘He was described as bubbly and full of life with brilliant communication skills.

‘All of that potential for a wonderful and fulfilling life was extinguished as he collapsed on his own clutching a leaf in the garden.

‘We can only imagine the pain and fear that must have blighted the end of his young life. For anyone, let alone a child, this was a shockingly terrible way for him to die.

‘How could it possibly be that this could happen? The truth is, in short, is that Hakeem died as a result of your deplorable negligence.

‘He died as a result of your catastrophic and deplorable parenting.

‘From the early spring of 2017 your parenting of Hakeem entered a drug-fuelled downward spiral into squalor, chaos and tragedy.

‘It is clear to me from the evidence that this was a truly exceptional and reprehensible breach of duty.

‘Your failure to manage Hakeem’s asthma was persistent and continuous and caused him obvious distress in the day-by-day deterioration of his condition.

‘This offence arises in the context of other serious criminality in the form of your abuse of heroin and cocaine and the charges of child cruelty.

‘His medication regime was ignored and neglected and he was exposed at home to triggers in a dirty, smoky and cold environment.

‘You fall to be sentenced in the category of very high culpability. There are aggravating features which need to be taken into account.

‘The victim was a young child and moreover you were his mother. You were the person who first and foremost had a responsibility for his welfare.

‘He was entitled to rely upon you as his adult caregiver, to take care of him and nurture him – especially protecting his health’.

The 999 call made by Heath after Hakeem was found was also played to the court during the trial.

She said: ‘He’s dead… my son* he’s took himself outside when we’re asleep because he’s got asthma* and he’s fell asleep* he’s dead. He’s gone… he’s blue and he’s stiff. There’s no saving him. He’s gone. He’s my baby… he’s my baby.’

Giving evidence Dr. Peter Ehrhardt, a former doctor of safeguarding in East Lancashire, said he was left ‘speechless’ at the way Hakeem had been treated.

The court was told Heath had smoked heroin and crack cocaine in the 48 hours before her son’s death and he also had tobacco in his lungs.

Dr. Ehrhardt said: ‘In my opinion she knew the previous night that Hakeem’s asthma was not under control.

‘Had she acted then in my opinion his deterioration would have been less severe and he would not have died.’

Heath had told cops after her arrest that Hakeem would go outside for some fresh air if he was ever struggling with his breathing.

She said in her police interview after his death: ‘I had a funny feeling he had gone out in the night and fell asleep outside.’

After the case Hakeem’s head teacher, David Crumps said: ‘The news of Hakeem’s death shocked our community five years ago – he was a friendly, polite little boy who will forever be remembered for his gentle nature.

‘His friends will remember him with love and great fondness and he is greatly missed.’

An additional statement on behalf of the children and staff at Nechells E-Act Academy said: ‘Hakeem was a most beautiful little boy, a great friend to many staff and children with a wicked sense of humour and an infectious giggle.

‘He was a warm and generous-hearted soul who was talented across many areas of the curriculum but especially so in music and the arts.

‘He totally stole the show with his performance as the ‘Christmas Star’ in the year two nativity play with his clear speaking voice and stage presence.

‘There wasn’t a dry eye in the house as he delivered his lines with poignancy, grace and humour.

‘The twinkle in his beautiful eyes was as bright as the stars in the sky, and our love for him will shine out forever, from all of his Nechells family.’

A jury of 10 women and two men found Heath guilty of manslaughter by gross negligence.

“Nothing will happen if a woman marries two husbands, the problem is nobody has gathered liver to do it and women don’t have money” – Man says