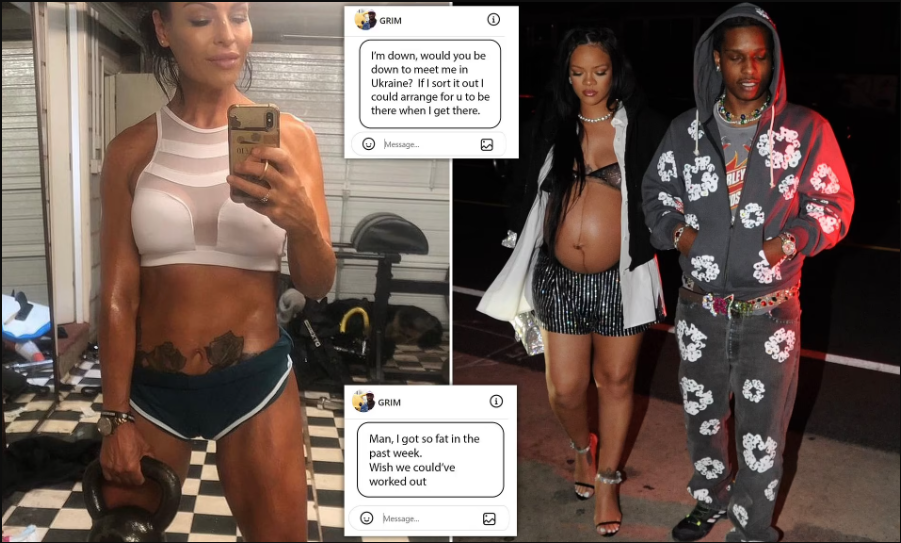 Mother-of-three claims Rihanna’s fiancé A$AP Rocky, 33, has been ‘secretly messaging her behind the pregnant singer’s back’

A British mother-of-three has accused Rihanna’s fiancé A$AP Rocky of ‘secretly messaging’ her for months, just weeks after he denied rumors that he’d cheated on the singer with shoe designer Amina Muaddi.

The Sun claimed that a woman named Jilly O’Donnell, 45, was contacted by someone who appears to be the rapper, 33, on Instagram, where he ‘bombarded her with flirty messages.’

According to Jilly, the alleged communication between herself and Rocky began in December 2021 and continued until ‘the start of last month.’

It was also alleged that he once offered to fly Jilly ‘1,700 miles to Ukraine to meet him’ months prior to the Russian invasion in February.

In a message purported to be from the rapper, he wrote: ‘I’m down, would you be down to meet me in Ukraine? If I sort it out I could arrange for u to be there when I get there.’

Responding to the message, Jilly insisted travel restrictions prevented her from flying as the UK continued to feel repercussions of the coronavirus pandemic.

She wrote: ‘I can’t get to Ukraine haha, I can’t even afford Xmas after lockdown last year. Plus the Prime Minister is a fat useless b*****d so no one is allowed anywhere. You should come here. Ukraine sounds freezing.’

Rocky allegedly responded with: ‘What you guys can’t travel anywhere???? That sucks. I just got here. Freezing my f*****g balls off. The gym here is beautiful though.’

He later added: ‘Man, I got so fat in the past week. Wish we could have worked out.’

Speaking to the outlet, Jilly alleged that Rocky reached out on the social media app in December but she initially ‘had absolutely no idea who he was.

‘I saw there was a blue tick on his name on Instagram so I asked my daughters. They told me it’s Rihanna’s boyfriend and thought it was hilarious,’ she claimed.

Rihanna, 33, is currently pregnant with her and Rocky’s first child. In December 2021, the Umbrella singer was believed to be at least four months along in her pregnancy.

Jilly claimed that Rocky had sent her three messages over the span of ten hours without any response from her.

When she did finally reply to the rapper’s alleged direct messages, she claimed that he ‘liked her comment with a heart emoji’ and they went on to ‘exchange dozens of messages’ over the next several months.

Jilly claims to have no idea why she was seemingly messaged by the rapper when he has 14.7million followers on Instagram, while she has just 1,500 followers.

‘I was having a laugh with my kids saying “your mum might be 45 but she’s still got it.” We’ve all been in stitches about it,’ she told the outlet.

Jilly claimed that Rocky sent her another message later that day, with the musician allegedly saying that he had put weight on and wishes they could work out together.

She told The Sun that there was ‘no way [she] would have flown out to meet him in Ukraine,’ but other women probably would have due to his celebrity status.

She added that lots of women would jump at the chance to meet a famous, rich musician but she found it all to just be a bit of a laugh.

Jilly concluded that nothing happened and it was all a ‘pretty light-hearted’ conversation, adding that she hopes Rocky and Rihanna will be very happy together.

Jilly’s alleged interactions with Rocky come just weeks after Rihanna was rumored to have split with the father of her child after she found him cheating with the shoe designer, Amina Muaddi.

Liquorose speaks on relationship with Emmanuel